Idaho State University has appointed R. Scott Rasmussen as the permanent dean of the ISU College of Technology.  Dr. Barbara Adamcik, Interim Provost and Vice President, made the official announcement earlier this month in a campus-wide e-mails to faculty and staff.  Rasmussen has served in the interim role since May 2011. 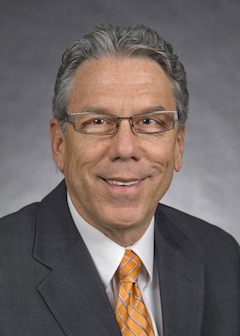 Prior to being appointed dean, Rasmussen was the executive director of the Energy Systems Technology and Education Center in the College of the Technology for four years.  Rasmussen also spent 10 years as department chair of the Electronic Department at the college.

In 2007, Rasmussen was instrumental in the creation of ESTEC with successful grant proposals to the National Science Foundation and the Department of Labor totaling over $2.6 million.  Under his direction, ESTEC has grown from three original programs to seven, with the most recent being the Nuclear Operations Technology and Renewable Energy Technology programs.  ESTEC places sought-after graduates with energy companies and other manufacturing firms across the country.

Prior to joining the ISU Faculty, Rasmussen was employed by the Union Pacific Railroad in the communications department, with responsibilities for systems maintenance and trouble shooting of a wide variety of analog and digital radio frequency systems.

Rasmussen holds an Associated of Applied Science degree from the Electronic Systems Technology program at the ISU College of Technology; a Bachelor of Science degree from ISU with a dual major in vocational-technical education and corporate training; and a Masters of Education degree from ISU.  He completed his thesis on the "Comparative Analysis of the Effectiveness of Electronics Troubleshooting Curriculum in Laboratory-based versus Theoretical Presentations."  While seeking his master's degree, he was named College of Education Student of the Year.

Rasmussen and his wife, Pat, are the parents of six children and 10 grandchildren.

The ISU College of Technology Advisory Board is organizing a reception to celebrate Rasmussen’s appointment on Thursday, April 26, from 3 to 6 p.m.  The reception is open to the public and will be held at the Kirkham's Warehouse at 902 South 1st Avenue.  Dale's Inc., Contractor Sales Inc., Dale's Outdoor Advertising, and Curves in Pocatello are hosting the event on behalf of College of Technology alumni and supporters.