The Idaho Summer Repertory at Idaho State University will present "Joseph and the Amazing Technicolor Dreamcoat" at 7:30 p.m. June 15, 16, 18, 21, 22 and 23 at the Beverly B. Bistline Theatre in the Stephens Performing Arts Center.

"Joseph and the Amazing Technicolor Dreamcoat" is an Andrew Lloyd Webber musical with lyrics by Tim Rice. The story is based on the "coat of many colors" story of Joseph from the Bible's Book of Genesis.The musical was first produced in London's West End in 1973 and opened on Broadway in New York City in 1982. 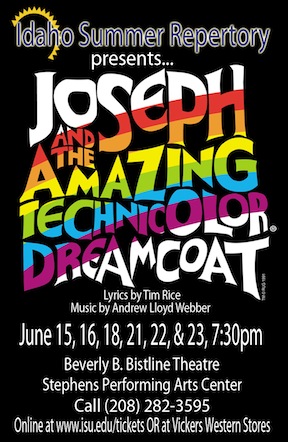 Since then, this musical's family-friendly storyline, universal themes and catchy music have resulted in more than 20,000 educational and amateur theatre group productions. Idaho Summer Repertory is proud to offer its version under the direction of Lisa Woodland.

The Biblical saga of Joseph and his coat of many colors comes to vibrant life in the delightful musical parable.  Joseph, his father's favorite son, is a boy blessed with prophetic dreams.  When he is sold into slavery by his jealous brothers and taken to Egypt, Joseph endures a series of adventures in which his spirit and humanity are continually challenged.  He is purchased by Potiphar where thwarting advances from Potiphar's wife lands him in jail.

When news of Joseph's gift to interpret dreams reaches the Pharaoh (who is wryly and riotously depicted as Elvis), Joseph is well on his way to becoming second in command.  Eventually his brothers, having suffered greatly, unknowingly find themselves groveling at the feet of the brother they betrayed but no longer recognize. After testing their integrity, Joseph reveals himself leading to a heartfelt reconciliation of the sons of Israel. Set to an engaging cornucopia of musical styles, from country-western and calypso to bubble-gum pop and rock 'n' roll, this Old Testament tale emerges both timely and timeless.

Director Woodland is excited to be involved with the first ever production of "Joseph" in the Bistline Theatre. The size of the theatre allows for larger community involvement including the traditional cast and a large children's chorus. With the larger cast and crew, more people from Southeast Idaho have a chance to act, sing and experience being on the "big-stage" at ISU.  Woodland said she feels that the variety of different musical styles has something to offer and entertain everyone.

Tickets are available at the Performing Arts Center Box Office or by phone at (208) 282-3595 or can be ordered online at www.isu.edu/tickets.

For more information contact Michael Helman, business and production manager, at 208-282-6452 or helmmic2@isu.edu