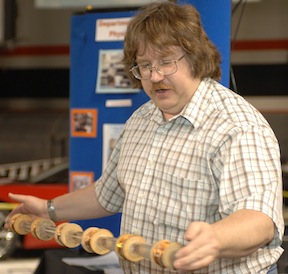 Children of all ages and their families are invited to attend this free event. Besides interactive booths and displays, science-themed songs, dances and art, the festival is sponsoring a number of contests for children of all ages. On the day of the festival, there will be an egg-drop competition for students in third and fourth grades, and students in grades fifth through eighth will have the opportunity to build a catapult for launching eggs across the Hutchinson Quadrangle.

Preregistration is highly recommended for both of these events by emailing idahosef@isu.edu. All ages are invited to participate in the sidewalk chalk-drawing contest. Several contests are in progress, including a science video competition for high school students, and a literature and art contest for grades third through eighth. Visit the website www.isu.edu/isef for details on each of these contests.

The Idaho festival is a satellite event that corresponds with the national USA Science and Engineering Festival being held in Washington, D.C., during the month of April. The national festival ends with a two-day expo in the Walter E. Washington Convention Center, which will feature 1,500 booths with hands-on activities from more than 500 organizations. There are also concurrent satellite science/engineering festivals taking place throughout the United States, but ISU’s festival is the only one scheduled in the Intermountain West.

"This is part of our nation's national science festival, and we are proud to be involved," said Linda DeVeaux, ISU associate professor in the ISU Department of Biological Sciences and one of the ISU event's four organizers. "Eventually, this may be celebrated statewide, but for now we're looking for strong participation in our area. The goal of the festival locally and nationally is to present hands-on, fun science activities to inspire the next generation of scientists and engineers."

Besides helping to organize the local festival, DeVeaux will represent Idaho State University at the national festival in Washington, D.C. DeVeaux will be in a booth that demonstrates accelerator technology, a technology DeVeaux uses to carry out studies on radiation-resistant microbes.

Visit http://www.usasciencefestival.org/ for more information on the national festival,