Using a powerful scanning electron microscope at the Idaho State University Center for Archaeology, Materials, and Applied Spectroscopy (CAMAS), ISU anthropologist and research scientist David Peterson is helping shed light on the making of gold by nomadic horsemen nearly 4,000 years ago on the Eurasian steppe grasslands of present-day Russia.

About 1850-1700 B.C. at the beginning of the Late Bronze Age in Russia's Middle Volga River Region, herders began to settle in small villages and buried their dead in burial mounds known as kurgans. Kurgan is a Russian term borrowed from Turkish that refers to elaborate prehistoric mound cemeteries with graves that often included metalwork, chariots, and human and animal sacrifices. 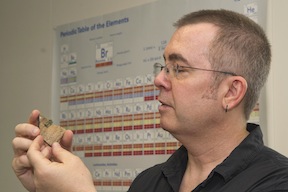 Peterson discovered that ornaments from these graves were decorated using a technique called depletion gilding. Late Bronze Age inhabitants of the Middle Volga covered pendants with a foil no more than one-tenth of a millimeter thick made of an alloy of gold and silver known as electrum. While the overall gold content of the foil is less than silver, through depletion gilding ancient Eurasian metallurgists were able to manipulate the concentration of gold on the outer surface to make the ornaments look like solid gold.

What is even more remarkable is the incredibly small amount of gold they needed to do this, Peterson said. Through the application of heat and naturally occurring chemicals, silver was depleted from the outer five micrometers of the foil covering one pendant, which made it appear as though it was made of pure gold (a micrometer is one thousandth of a millimeter). The gold enriched surface is so microscopically thin that its thickness could only be measured by looking at a section cut through it with a scanning electron microscope.

"Finding the use of this technique in the Russian steppes is fascinating because it's an example of the use of a remarkable technology simply for ornamentation, more than a thousand years before gilding techniques were perfected in ancient Greece and Rome," Peterson said.

The depletion gilding technique that Peterson has documented in the Russian steppes was first discovered by MIT scientist Heather Lechtman in the Precolumbian Andes Mountains Region of South America. The Herrett Center in Twin Falls has examples of such depletion-gilded ornaments from Costa Rica that he examined in May in order to compare them with the pendants from Russia. 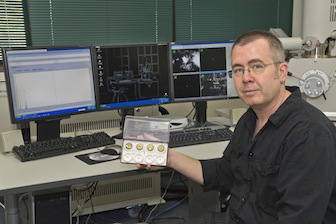 This discovery also adds to the knowledge base about the residents of the Middle Volga during this time period who were part of the Srubnaya culture. They mined copper and produced metalwork regularly on a small scale even though they were not members of urban civilizations that are more commonly associated with early technologies, like Hammurabi’s Babylon, which thrived during the same period far to the south in what is now Iraq.

"In the Bronze Age steppes, people lived in small villages and were otherwise horse-riding, mobile pastoralists or nomads, not unlike Genghis Khan," Peterson said. "Discovering their technological sophistication some 3,000 years before Genghis Khan is exciting news to me and my Russian and American colleagues."

Often thought of as simple barbarians, early Srubnaya villagers and pastoralists were a more technologically advanced and sophisticated people than they’ve been given credit for.

"The documentation of depletion gilding provides new insight on the technical sophistication of the metalworkers who made the early gold work from the region, and the early adoption of gold as a highly valued material in the Eurasian steppes," Peterson said.

Peterson began research in this area of Russia with colleagues at the Institute of History and Archaeology of the Volga in Samara, Russia at Hartwick College in Oneonta, N.Y., while he was a graduate student. He received minute samples of the kurgan gold from his Russian colleagues Pavel Kuznetsov and Oleg Mochalov, who allowed him to remove small sections from three foil-covered pendants.

After examining the samples at the ISU Center for Archaeology, Materials, and Applied Spectroscopy, Peterson concluded that corrosion-based depletion gilding was applied to the foil on one of the pendants, and that a depletion gilding process may have been used on the other two, which are from a burial in a different Srubnaya kurgan cemetery at Nizhnyaya Orlyanka. He has published two articles about his archaeometallurgical research in Russia and another is in press. Others dealing with depletion gilding, which was identified in the Srubnaya pendants in April 2012, are in preparation.

The Wenner-Gren Foundation for Anthropological Research provided funding for Peterson's research in the Middle Volga. The material for this study is also based upon work supported by National Science Foundation grants and ISU’s Office of Research.

Peterson said additional studies may indicate that diffusion gilding was much more widespread than previously thought.  Research by Peterson and his colleagues adds a new chapter to early developments in the use of gold before the Iron Age.