May 2, 2012
ISU Marketing and Communications

Idaho State University-Meridian pharmacy Professor Karl Madaras-Kelly has received a $365,166 research grant from the National Institutes of Health to develop standards for measuring antibiotic use in hospitalized patients.

The study—the largest of its kind to date—has the potential to improve care and decrease antibiotic-resistant infections in hospitals nationwide. 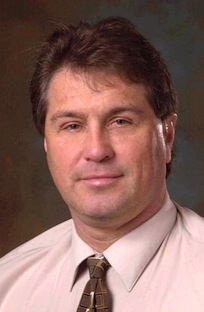 Funding for the three-year project, which was awarded March 1, is from the National Institute of Allergy and Infectious Diseases.

Because bacteria have become increasingly resistant to antibiotics, physicians frequently prescribe a combination of broad-spectrum antibiotics to increase the chances of killing resistant bacteria.

That can be a problem, explained Madaras-Kelly, because the use of broad-spectrum antibiotics can actually increase the risk of bacterial-resistant infections, such as Clostridium difficile. The Centers for Disease Control says the bug, which causes severe diarrhea, is responsible for 14,000 deaths in America each year.

To discourage growth of resistant infections, the CDC recommends clinicians de-escalate broad-spectrum antibiotic therapy as soon as patients are stable.  Madaras-Kelly and his research team would like to develop a standardized method for measuring that de-escalation by creating a spectrum metric that characterizes an antibiotics spectrum of activity.  To date, none exists, limiting the ability of researchers and policy makers to identify practices that may improve care.

"Once fully developed and tested, the method can be applied to determine antibiotic de-escalation rates across hospitals and health-care systems, which will allow policy makers to measure and assess antibiotic stewardship or the appropriate use of antibiotics within those systems," said Madaras-Kelly.

In the first phase of the study, the research team, which includes ISU counseling professor Nicole Hill, will conduct a series of surveys involving a national pool of pharmacists, physicians and infectious disease specialists who practice antibiotic de-escalation.  This phase of the study will establish consensus on the criteria used to develop the spectrum scoring metric and to define antibiotic de-escalation according to criteria based on the scoring metric.

In the second phase, Madaras-Kelly and collaborators from the University of Utah School of Medicine, and ISU affiliate faculty biostatistician, Richard Remington, will identify up to 50,000 patients treated for health-care associated pneumonia, a disease where broad-spectrum antibiotic therapy is frequently prescribed.

They'll analyze electronic medical records from 128 Department of  Veterans Affairs hospitals nationwide.  The DVA has one of the most sophisticated computerized medical records systems in the world.

In the final phase, researchers will seek to identify variables associated with differences in de-escalation rates between hospitals with the ultimate goal of developing standards that can be used by hospital accrediting bodies, the CDC, or the Center for Medicare Services, according to Madaras-Kelly.