Three Idaho State University faculty members were named as Distinguished Faculty at an awards ceremony on April 12 at the Stephens Performing Arts Center, and will be honored at ISU commencement May 5. 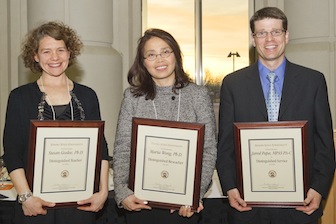 "These three awards are the highest honors bestowed on faculty at Idaho State University and it is quite a distinction to receive one," said Barbara Adamcik, interim ISU Provost and Vice President for Academic Affairs. "The honorees are among our most accomplished faculty."

Susan Goslee, Distinguished Teacher, is an assistant professor in the Department of English and Philosophy, specializing in creative writing. Her poems have appeared or are forthcoming in such journals as The Carolina Quarterly, The Cimarron Review, West Branch, Prairie Schooner, Salamander, Indiana Review, and Diagram.

She teaches introductory through graduate-level courses in poetry and fiction writing. She also teaches the "Literary Magazine Production" class and acts as the faculty advisor for Black Rock & Sage, ISU's student arts journal. In addition, she serves as chair of the department's undergraduate committee. Each July, Goslee works at the Appalachian Institute for Creative Learning, a non-profit summer camp for non-traditional learners and underserved gifted children from Appalachia. She also serves on the organization's board year-round.

Other finalists for the Distinguished Teacher Award, who are 2012 Outstanding Master Teachers, were Galen Louis, director and assistant professor in the Master of Public Health program, ISU-Meridian; Julie Newsome, associate professor in the Department of Educational Foundations, College of Education; Kevin Parker, professor of computer science and computer information systems, College of Business; and Jean Pfau, associate professor of biological sciences.

He joined the faculty in 2008, following work as a National Health Service Corps Scholar in rural Washington at a community health center where he served primarily Spanish-speaking patients.

Papa's dedication to service is evident in recent humanitarian expeditions to Peru. In 2011 and 2012, Papa and a group of students and faculty members traveled to Peru with Idaho Condor to provide much-needed medical care for underserved populations.

Papa serves as the Physician Assistant program representative to the Idaho Academy of Physician Assistants. As service learning coordinator for the department, he helps organize and coordinate dozens of community health screenings in the Treasure Valley. He also volunteers at, and facilitates PA student participation in, various community service activities including free community clinics, health fairs, vaccination clinics, annual homeless stand downs, and free screenings for Shriner's Orthopedic Hospital. Additionally, he dedicates time to encouraging disadvantaged students to pursue medical careers including hosting a workshop with the Hispanic Youth Symposium.

Maria Wong, Distinguished Researcher, is an associate professor and director of the Experimental Graduate Program at the Idaho State University psychology department. Her major areas of research include substance use and abuse, sleep problems, self- regulation, resilience and longitudinal methodology.

Since coming to ISU in 2004, she has authored and coauthored 25 peer-reviewed papers, one book, two book chapters and 20 peer-reviewed scientific abstracts. She has participated in 48 presentations in national and regional conferences between 2004-2012. Alcoholism: Clinical and Experimental Studies, one of the top journals in alcoholism research, has published her work and chosen it twice as “Highlights of the Issue.”

Wong received the Outstanding Experimental Faculty Award from the ISU psychology department in 2008 and 2011. She was an ISU Outstanding Researcher in 2009, 2011 and 2012.