Georgia Orwick and Anne Merkley are joining to have their second show each of art inspired by the ruins of Mexico at the Eli. M. Oboler Library, 850 S. 9th Ave., Pocatello, from Nov. 5 through Jan. 31.

A reception will be held on Nov. 14 from 7 to 8 p.m. in the art gallery of the Oboler Library. 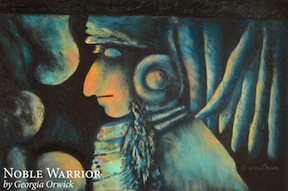 Orwick and Merkley became friends several years ago over their common interest in and love of Mexico's pre-Columbian culture. Georgia lived and traveled part of each year in the country for several years. Anne made her first trip to Mexico in 1965 and has since done anthropological work in the areas of cultural preservation and natural conservation in Mexico, Guatemala, Ecuador and Peru.

Both Orwick's and Merkley's work is defined through their experiences and understanding of Mayan culture. Known for her watercolor paintings of ancient rock art in Baja California, Georgia has recently expanded her subject matter to include friezes and structures of the Mayan world, and her media to include pastels.

She says, "As I explored the ruins of ancient Maya city-states, I was fascinated with their fanciful stone carvings, the ornate temples and palaces with their corbelled, vaulted ceilings. It is the story of one of the greatest civilizations of the ancient world." 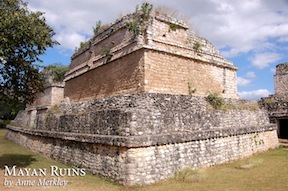 Anne began her romance with photography as a pre-teen when she received a Kodak "Brownie" camera as a gift. She feels that through photos, she can let the subject matter speak for itself. A multimedia artist, Anne has garnered dozens of national, regional and local awards for her watercolors and oils, especially portraits. She has taught, exhibited, taken commissions, and sold her work out of Pocatello for most of her adult life.

In addition to a Master of Fine Arts Degree, she also has masters degrees in anthropology, education, and political science, all from Idaho State University. She credits much of her success to her diversified educational background.

With a master's degree in public administration from the University of North Dakota, Georgia "hit the road" and traveled for 18 years from Alaska to Central America, studying and selling stained glass, watercolor, and beadwork along the way. In addition to being an active Pocatello artist, she is an interpreter at the Museum of Natural History at ISU. Also, as a Master Gardener and landscape designer, she has won many awards for Juniper Hills Country Club and private gardens.

"Ancient Mayan Mysteries" is free and open to the public and may be viewed during regular library hours. For more information, including schedule changes, contact the library at 282-3248.