Idaho State University debate has had a successful fall season heading into a Nov. 9-12 tournament at Wake Forest University in Winston-Salem, N.C., as the ISU James M. and Sharon E. Rupp Debate Society prepares to host a national tournament this spring.

Highlights of the fall have been many, and included one team getting stuck in Boston last week following Hurricane Sandy after competing in a tournament at Harvard University. At the Harvard tournament, one of the most competitive of the season, seniors Matea Ivanovic, Boise, and Roger Copenhaver, Puyallup, Wash., traveled with Assistant Coach Scott Odekirk to compete. The team ended with a record of 4-4 and Ivanovic was named 11th speaker, an honor in such a tough field of competitors. 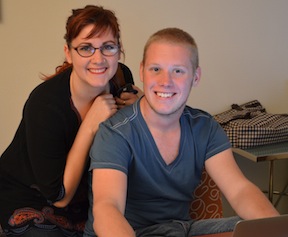 Due to Hurricane Sandy, the team's return flight was cancelled and they were stranded in Boston along with many other debate teams for a few extra days. They returned on Friday, Nov. 2, taking the first flight they could book because of the thousands of cancelled flights that the hurricane caused.

Another major highlight of the fall was ISU debate turning in first- and second-place finishes at the ISU James M. and Sharon E. Rupp Debate Society's annual Rupp Debate Tournament, hosted in September. The tournament included participants from six states and more than 40 competitors. The team had success in both the Junior Varsity and Open divisions.  Freshmen Katie Quinn, from Twin Falls, and Andrew Hoth, Boise, took first in the Junior Varsity with victories over Weber State University and the University of Wyoming.

In the Open Division at the ISU tournament, Ivanovic and Copenhaver advanced to the finals with an 8-0 record. In the final they lost to a team from the University of Nevada, Las Vegas and finished second. Ivanovic was named as the third best individual speaker at the tournament. Sophomores Kendra Doty and Ryan Hand, both of Boise, were both top-10 speakers, and finished in fifth place.

"We had a great tournament and we were very excited that so many teams to travel to Pocatello," said Sarah Partlow-Lefevre, ISU director of debate. "We are looking forward to hosting nationals in the spring."

In mid-October, the ISU Debate traveled to Las Vegas to compete in the UNLV invitational where the team had another good showing. Seniors Ivanovic and Roger Copenhaver, of Seattle, made the quarterfinals of the tournament, defeating the top-ranked team competing at the tournament, Cal State University, Fullerton. Ivanovic was honored as the 10th overall speaker at the tournament.

"We believe that our momentum is in the right place now, and moving into the most important part of our season, we seem to be debating our best," Odekirk said.

"I'm really happy with the performance of the whole team, as Roger and Matea performed very well, and our freshmen also exceeded our expectations. I think we're going to have a great rest of the season," Partlow-Lefevre said.

Following the Wake Forest tournament this weekend, the team will travel to their final tournament of the fall semester, a regional tournament at Whitman College in Walla Walla, Wash.

Additionally, with generous support from the ISU College of Arts and Letters, the team is gearing up to host the Cross Examination Debate Associate (CEDA) National Championship tournament in March 2013. CEDA Nationals will bring in about 200 debate teams with 500 participants from throughout the United States.