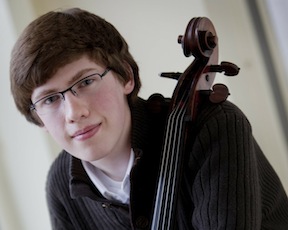 In March 2011 he won both the Burdick-Thorne Gold Medal and the Bach Award for Best Bach Solo Performance in the 2011 Stulberg International String Competition. Huntington entered The Colburn School’s Conservatory of Music in Los Angeles in September 2012.

"What a thrill for Pocatello audiences to have the opportunity to witness a young virtuoso at the start of his career," said Heather Sandy, Symphony Executive Director.

The concert is sponsored by Allstate Insurance and D.L. Evans Bank.

For more information on Huntington and the Idaho State Civic Symphony, visit www.thesymphony.us.

Tickets are $32 for adults, $17 for pre-college students, $12 for balcony seating and free for ISU students with a valid Bengal card. Tickets may be purchased at the Stephens Performing Arts Center Box Office, open from 10 a.m. to 4:30 p.m., Monday through Friday. Tickets may also be purchased over the phone at (208) 282-3595, online at www.isu.edu/tickets or at Vickers Western Stores in Pocatello or Idaho Falls.  On the evening of the concert, the Box Office opens at 6:30 p.m.; rush tickets at $17 will be available at 7 p.m. for any remaining seating.