Strain is a graduate student in the ISU experimental psychology Master of Science program. She recently was accepted to the 2011 Spinal Cord Injury Training Program held at the Ohio State University this summer. This program is an intensive three-week workshop in spinal cord injury research methods and theory, conducted by some of the world’s leaders in spinal cord injury research. It involves hands-on training in state-of-the-art spinal cord research techniques, interactive lectures and group discussions. 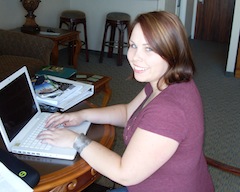 The program is attended by senior graduate students, postdoctoral researchers, neuroscientists and neurosurgeons from around the world, and is sponsored by the National Institutes of Health and The Ohio State University College of Medicine.

"Participation in the program is very limited and competitive. Therefore, not only is it remarkable that Misty was accepted into the program, but she also was provided with a scholarship from the program to cover half of the tuition costs," Brumley said.

The remaining tuition costs are being covered by the ISU Office of Research and the Idaho INBRE (IDeA Network for Biomedical Research Excellence) program.

Strain is currently in her second year of graduate school. In addition to attending the Spinal Cord Injury Training Program this summer, she is also collecting data for her thesis project. Her thesis examines the role of the spinal cord in the development and modulation of locomotor behavior in developing rats. She will be presenting data from her thesis at the upcoming meetings of the Society for Neuroscience, the International Society for Developmental Psychobiology, and the Idaho INBRE.

After obtaining her master's degree in experimental psychology from ISU, Strain plans to pursue a Ph.D. and continue her research in neuroscience and spinal cord research. Ultimately, she wants to hold an academic appointment and have her own research lab. Strain was the recipient of the ISU Department of Psychology's Outstanding Graduate Student in the experimental program award this past year, and is currently funded by an INBRE graduate fellowship. She has been working in Brumley’s lab since July 2008. 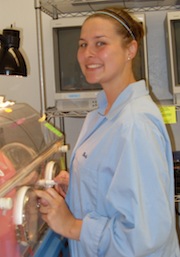 Swann is an undergraduate student majoring in psychology who has been working on Brumley's research team since September 2009. She recently was awarded three research grants for an independent project that examines how direct spinal administration of a serotonin receptor agonist influences locomotor behavior in young rats. Swann’s project provides implications for rehabilitation of function in individuals with a spinal cord injury, as well as infants with motor or neurological disorders.

Last fall, she received an ISU Undergraduate Research Grant for $2,000 for this project. This summer she was awarded a $1,400 Psi Chi Undergraduate Grant and a Psi Chi $5,000 Summer Research Grant. Psi Chi is the international honor society in psychology, and the Psi Chi grants that Hillary received were highly competitive at an international level.

Swann wrote all three grant proposals, did pilot research for the project, and is currently working on collecting and analyzing data for this research project. She will present data from her project at the upcoming meetings of the International Society for Developmental Psychobiology and the Idaho INBRE.

Swann is in her senior year at ISU, and plans to graduate with a bachelor’s degree in psychology this next year and is applying to graduate programs in psychology and neuroscience. She is most interested in how drugs and neurotransmitters influence functioning of the nervous system and behavior.

Swann is well on her way to a career in neuroscience, according to Brumley. Besides the three grants under her built, Swann has given multiple presentations at regional and international conferences. She has also received research training in behavioral science with Brumley and in neuropharmacology with Chris Downing, assistant professor, ISU Department of Biomedical and Pharmaceutical Sciences. Her goal is to gain an academic position in a university setting so that she can continue to conduct neuroscience research. She was also recently elected treasurer for the ISU chapter of Psi Chi.