Jeff Meldrum, an associate professor of anatomy and anthropology at Idaho State University, and author of the book, "Sasquatch: Legend Meets Science," participated in the production of a two-hour documentary produced by Dangerous Films of London for joint airing on the History Channel and Discovery Canada.

The documentary is scheduled to air at 7 p.m. Feb. 2 on the History Channel. 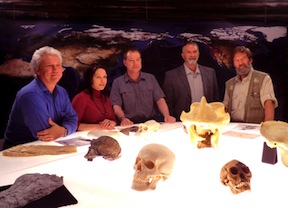 Science is increasingly recognizing that past Homo sapiens shared the planet with other upright walking primates. As recently as 20,000 years ago there were four or more other species of Homo coexisting across Asia, plus a number of species of large apes, according to participating panel members.  Could the survival of some of these into the present have spawned the stories of the yeti, the sasquatch, and the orang pendek.

Last October, Meldrum met in Montreal with four other accomplished scholars for a roundtable discussion of this very possibility. The theme was relic man-like creatures around the globe.

The panel of five considered the pervasive and persistent reports of unrecognized man-like creatures from remote forested corners of the globe and weighed the evidence for their existence.

"It was personally gratifying to hear my colleagues objectively evaluate the footprints, hair samples and sightings as serious evidence; to see their intrigue mount as they contemplated its implications," Meldrum said.

Later Redmond and Meldrum traveled to Vancouver Island, British Columbia, to speak with First Nations tribal members to hear of their cultural traditions regarding the sasquatch, or wild people of the woods. They also interviewed witnesses that had recent encounters with the sasquatch and surveyed the habitat to determine whether a large rare ape could make a living and remain hidden there.

"The sasquatch is certainly a part of the native landscape – both in the natural world and in the mystical. Their oral traditions and observations of the sasquatch describe behaviors not unlike those attributed to the mountain gorilla, for example"” Meldrum said.