A promising drug for treating pancreatic cancer – the type of cancer that has recently struck Apple CEO Steve Jobs and actor Patrick Swayze – is being studied by a team of Idaho State University researchers.

The researchers' efforts have been bolstered by a Higher Education Research Council $50,000 grant from the Idaho State Board of Education.

"At this time, pancreatic cancer has low survival rates, about 4 to 6 percent after five years, and there are no good drugs for its treatment," said Alok Bhushan, ISU pharmacy professor. "We are studying a newly synthesized compound that, in initial studies, is effective against pancreatic cancer cells and is not toxic." 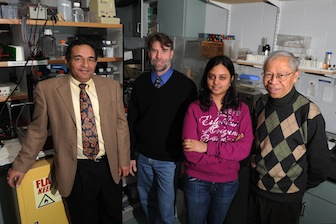 "We are very excited," Lai said. "This new compound is more effective on cancer cells and less toxic on normal cells that we have tested it on, than drugs currently being used to treat the cancer."

"We want to emphasize that we're just in the initial state of studying this compound and there are many more steps that must be done to determine if it can be used to treat pancreatic cancer," Bhushan said. "There is a lot of testing and there are clinical trials yet to be done."

The researchers are in the pre-clinical phase of research and have completed testing isolated cancer cells in their lab. The next step in studying the drug, which the researchers are engaged in now, is studying how the drug works at molecular level.

In addition, the scientists are studying the mechanisms of the compound to determine why it is effective. They also are completing a detail chemical analysis of the drug’s properties that could help with the design and formulation of the drug in the future.

If the drug continues to look promising after this phase of the research, more testing will be done and, eventually, clinical trials, testing the drug on human subjects, would be completed.

The title of this study is "Development of a Novel Drug to Treat Pancreatic Cancer."

Nationally and within Idaho, it is recognized that the intellectual property and technology created through university research is not yet being fully utilized or reaching its economic potential. The Idaho State Board of Education is appropriated funds each year by the Legislature to be used for the mission and goals of the Higher Education Research Council (HERC).

HERC established the incubation fund in 2011 to help fully realize the potential of the technical advances of the universities, which result from research.  The fund is used to make competitive awards to promising technologies to support technology transfer and commercialization, with the expectation that the licensing of the technologies for commercial applications will provide benefits to the universities and stimulate economic development within Idaho.