When you ask a person “what’s up" and he responds, "I can’t really talk right now because we have 49 more teeth to scan today and we’re still not done with the flippers," you can generally assume he's up to something interesting.

This month, two research associates from the Idaho State University Idaho Virtualization Laboratory, Robert Schlader and Nicholas Clement (who is quoted above), traveled to Port Towsend, Wash., and scanned bones of a complete skeleton of an orca, or killer whale. 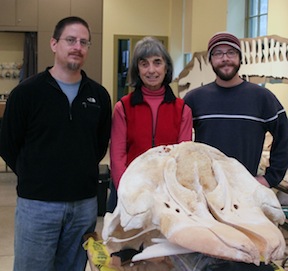 Those scanned images will be converted to 3-D images that can be displayed on computers throughout the world. They have been specifically scanned for the ISU Virtual Zooarchaeology of the Arctic Project (VZAP) project, and the Port Townsend Marine Science Center, which is part of Washington’s Fort Worden State Park.

ISU VZAP, which last fall received a $1 million grant from the National Science Foundation, has been creating an online two- and three-dimensional archeological collection of Arctic animal bones since 2008. It has produced more than 3,000 individual 3-D models and more than 12,000 digital photographs, while also developing advanced 3-D laser scanning protocols (visit (http://vzap.iri.isu.edu/ for more info on VZAP).

Scanning an entire orca skeleton – including the animal’s approximately 3-foot long skull and 200 other oversized bones including ribs, flippers, scapulas and teeth – however, wasn’t something ISU researchers thought they'd have an opportunity to do.

"For the VZAP project one of the marine animals we really wanted to do, but we didn’t think there was any chance this side of perdition we’d get to do it, was an orca," said Schlader, manager of the Idaho Virtualization Laboratory. "But then, through connections we’ve made with the Burke Museum in Seattle, an opportunity came out of the blue."

Schlader and his ISU colleagues had worked scanning the bones of other marine mammals in the Burke Museum's collections. Although this museum did not have an orca, one of its curators was aware that the Port Townsend group had an orca skeleton that it was putting together as part of an exhibit, and the ISU researchers made contact.

"We corresponded and said 'yeah we can do that,' and agreed to do it, even though we were terrified that we'd never scanned something so large," Schlader said.

"Normally, we have museum bones sent here for scanning," said Herbert Maschner, director of the Idaho Virtualization Laboratory and interim director of the Idaho Museum of Natural History. "But that wasn’t possible for a complete orca skeleton. It fits within our mission of the VZAP project, however, so we sent our people there."

Schlader and Clement headed to Port Townsend with their sophisticated photography and scanning equipment in tow. During a six-day period in January they successfully completed scans of the bones, often working in front of an audience of Port Townsend Marine Science Center personnel and members of the public.

To date, this is the first time that an orca skeleton has been digitized in this manner and will provide an invaluable analytical tool for both quantitative and qualitative analysis in oceanographic research and facilitate the identification of marine mammal skeletal remains for faunal analysts, archaeologists and marine biologists alike, Clement said.

The Port Townsend center acquired the orca bones in 2002 from a dead female that washed up inside the Dungeness Spit, located on  Puget Sound near Port Townsend. The female, affectionately named Hope by the science center staff, was accompanied by another orca, a male that was nearby in shallow water, which was assumed to be the female's son, according to the Peninsula Daily newspaper.

Staff at the Port Townsend Marine Sciences center will work with Lee Post, a world-class expert in skeleton articulation and mounting, to make Hope one of only five complete orca skeletons on display anywhere in the world.  The skeleton will be part of an exhibit, titled the "Orca Project," about the two orcas. The science center will also use the 3-D images created by ISU for a part of the exhibit and for teaching outreach.

The opportunity to capture the elements of the skeleton in 3-D before it was mounted created an unprecedented challenge for the staff at the IVL, but will provide an outstanding addition to the ongoing online collection of arctic terrestrial and marine mammals.

"From my perspective," Schlader said, "it was a once-in-a-lifetime opportunity, not only for VZAP, but in general for the scientific community, because we captured all the bones while they were still in pristine condition."

"The rest, at this point," he continued, "is history."