Idaho State University student Mike Adams will pursue his passions for sculpture, Viking ships, and Norse mythology – combining these interests into multi-media sculptural installations – during the 2011-12 academic year while working on a Fulbright grant in Oslo, Norway.

"I'll be making sculptures that explore the themes of voyages and migration, incorporating video projections," said Adams, whose works can be viewed at www.MikeAdamsArtist.com. 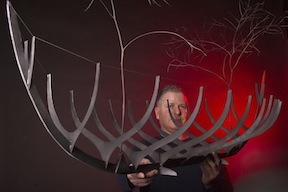 Adams earned his Bachelor of Fine Arts degree in painting from the San Francisco Art Institute in 1986, and chose the graduate school at ISU because of the strength of the art program, and the beautiful natural setting.

"It's been incredibly exciting," said Adams, who is scheduled to earn his Master of Fine Arts Degree in sculpture in May. "I feel like I've been on a sugar high for the last few days and have felt light-headed and elated since being notified."

His Fulbright project title is "A Sculptural Investigation of the Vessel and its Relation to Created Experience." On his blog (http://mikeadamsartist.com/blog2/), Adams states, "That’s a little heavy sounding, but the idea is to explore how boats and ships, like art—and boats and ships as art—are a means of creating experiences. They 'take us places.'" 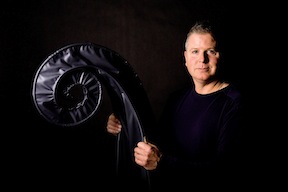 He will work directly with sculptor Victor Mutelekesha, a native of Zambia, now residing in Oslo, who shares Adams’ passions of sculpture and the vessel form. Adams will also collaborate with Professor Jan Bill of the Viking Ship Museum, who has extensive knowledge of Viking history, their ships, and a great appreciation of the Vikings' aesthetic sensibility. Adams and Bill have also discussed "Draw a Viking Ship Day" events at the museum, which will be geared toward families and form part of the community outreach component that is critical to the success of the Fulbright program.

Adams, a native of Seattle and a former boat builder by trade, lived in Oslo last summer, devoting time to learning Norwegian and familiarizing himself with the country. He also established a working relationship with Victor Mutelekesha, the sculptor he will be working with during his Fulbright.

"Victor is doing art that is very advanced, but he could communicate with me in a down-to-earth way," Adams said.

Adams expressed his appreciation for the help he received from Sharon Sieber, ISU Fulbright Program advisor. Sieber is professor of Spanish and comparative literature.

"Working with Sharon has been a remarkable and rewarding experience," Adams said, in part because Sieber provided the opportunity for an interdisciplinary approach to developing ideas. "Sharon was a sounding board, and she was able to help me find a means to express visual concepts in words, which I find challenging." 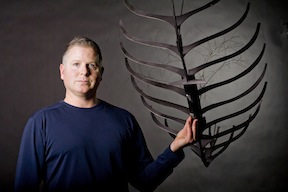 It was Ben Hunt, ISU visiting artist and lecturer in sculpture for the 2008-2009 academic year, whose idea it was for Adams to apply for a Fulbright initially.  "It became a little seed in my head, after I told him I wanted to go to Oslo to see Viking ships, and the ships of polar explorers Roald Amundsen and Fridtjof Nansen," Adams says.

"We're very pleased that Mike has received this Fulbright," said Sieber. "The type of award he received, which is for a studio artist, is one of the most competitive grants Fulbright offers. There are very few of this type of grant awarded.  I'm really overjoyed that Mike was selected."

"It's not so much just receiving the grant or the prestige of it," added Adams, "but the opportunity to do something really interesting and important that excites me the most."

As a Fulbrighter, Adams will join the ranks of distinguished alumni of the program.  Fulbright alumni have become heads of state, judges, ambassadors, cabinet ministers, CEOs, university presidents, journalists, artists, professors and teachers.  They have been awarded 37 Nobel Prizes.  Since its inception more than 60 years ago, approximately 300,000 Fulbrighters have participated in the program.

The program, named for the late Sen. J. William Fulbright of Arkansas, is the U.S. government’s flagship program in international educational exchange.

ISU students can apply for a Fulbright fellowship through the Fulbright Program Adviser if they are graduating seniors or have recently graduated from ISU.  For more information in general on the Fulbright program, visit http://fulbright.state.gov/ or http://us.fulbrightonline.org/home.html.

For more information for applying for a Fulbright at ISU, contact Sieber at (208) 282-2883 or siebshar@isu.edu.