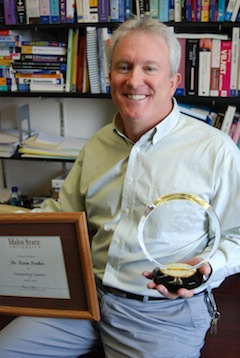 Idaho State University honored five professors, including Parker, with the designation of "Master Teacher." This award requires nominations from at least two students, faculty, or administrators.

As if that was not enough, the Associated Students of ISU presented Parker with the "Faculty Member of the Year" award. Three of Parker's students, Dinesh Bastakoti, Yogesh Baral, and Emily Koskella, nominated him for the ASISU award.

This is not the first time Parker has been awarded for excellence. He received the ISU College of Business 2002-2003 Outstanding Teacher Award.

Parker joined the Department of Computer Information Systems in 1999 as an Assistant Professor.  He was promoted to associate professor in 2004 and to full professor in 2005.  Parker's courses at ISU have included both introductory and advanced programming using Visual Basic, object-oriented development using Java, systems analysis and design, database design, and web development for eCommerce.