Charley Jones of Boise, co-owner and president of Stinker Stores (http://www.stinker.com) and its affiliated companies, is the Idaho Business Leader of the Year (IBLOY) 2011.

The award annually recognizes an Idaho business leader who has demonstrated outstanding business and professional ethics and supported community, civic and education activities. 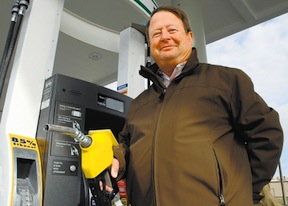 Following graduation and completion of his active duty service requirement with the U. S. Army, Jones returned to Boise and began his business career in public accounting. His 35-year career includes work as a CPA, staff accountant and controller for private and public companies, and president of an Anheuser-Busch beer distributorship. He became a business owner in 2002 when he and his business partner, Shawn Davis, purchased Stinker Stores.

Stinker Stores is an iconic Idaho company founded by Farris Lind in the late 1930's. Stinker Stores is best known in Idaho for its Skunk logo and irreverent humor on highway road signs in the 50's and 60's. When Jones and Davis purchased Stinker

Stores in 2002, many of the "business opportunities" looked more like massive problems. There were many old stores that had been poorly maintained and employee morale was low. Financial systems and controls were deficient and in some cases nonexistent. The deteriorating financial condition of the company in recent years had forced the sale by the founding family.

Piling more debt on a company that is already struggling financially is a questionable strategy, but that was the business plan. Jones and Davis convinced Zions Bank and Sinclair that they could turn the business around. Eight years later, the business turnaround is going well and the business is pursuing new opportunities to grow.

Jones points to Stinker's strengths in 2011:

• Industry leader in retail and wholesale sales of renewable biofuels

• 21st largest privately held company in Idaho as recognized in the 2010 edition of Idaho Private 75, published by The Idaho Statesman

Jones is a member of the Board of Directors of Zions First National Bank and has served in that role since 2006. His professional and industry memberships include:  Idaho Petroleum Marketers and Convenience Store Association, NACS

Jones attributes his success at Stinker Stores to the hard work of the dedicated Stinker Team. His advice to younger generations in search of business and personal success is: "Re-invent – persevere – never quit. Life is a journey. Where you are headed is more important than where you are."

One of Jones' favorite quotes is:

"Whatever you do, or dream you can, begin it.  Boldness has genius and power and magic in it."  Johann Wolfgang von Goethe

Individual tickets to the March 10 award banquet as well as event sponsorships are available. For more information, contact Brittne Russum, Alpha Kappa Psi IBLOY chair, at 208-254-0879 or by e-mail at russbrit@isu.edu.