The study was completed by Idaho State University and Brigham Young University researchers working in cooperation with the Utah State Parks and the Utah Division of Wildlife Resources. 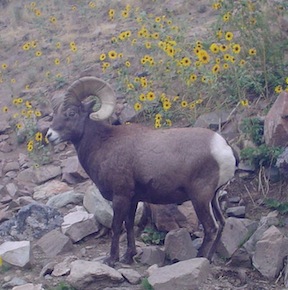 "With the work we've done on this Antelope Island study and previous work I've done, it indicates that when considering habitat manipulations and adding water sources you really need to consider sexual segregation and the needs for the different sexes across the range of their habitat," said Jericho Whiting, a former Idaho State University Ph.D. student who co-authored the study and who now works for S.M. Stoller Corporation.

In the study "Sexual segregation and use of water by bighorn sheep: implications for conservation" published this fall in the journal Animal Conservation, the researchers documented that when female bighorn segregated from male bighorns they spend large periods of time away from their central watering areas on the island.

"During the birthing period the females use rough, rocky outcrops removed from water sources and only use specific water sources in close proximity," Whiting said. "During the period of segregation the primary distribution of females and males does not overlap."

This information could have important implications for wildlife managers. Bighorn sheep populations in the Western United States have plummeted in the last 30 years and most attempts to reintroduce these animals have failed.

"First, the study shows that in arid lands, water is the crucial component in persistent dry areas to have a sheep population, although other factors, such as disease, also may be important," said Terry Bowyer, ISU biological sciences professor and co-author on the study. "No water, no sheep. Water resources are a critical factor when these introductions have been successful. One of the things not considered previously during the translocation of bighorn sheep was that for part of year males and females don't live together and that females may move to areas with poorer overall water resources compared with what is available on their total range."

This brings up the notion that in general big game managers need to begin managing the sexes of these mammals as if they are different species.

The other three authors on the study were ISU’s John Kie and V.C. Bleich, and BYU's J.T. Flinders.

"Antelope Island is such a unique place to complete such a study because the animals can’t leave the island," Whiting said. "This gave us a clear picture of where the water sources were and provided a unique opportunity to study their behavior."

Idaho State University enjoys the distinguished rating of Research University-High by the Carnegie Foundation, and is a leader in a broad range of innovative research, teaching and learning through its six colleges and Division of Health Sciences. Visit ISU today at www.isu.edu and www.isu.edu/meridian.