Two Idaho State University students to compete in Met Opera Auditions; one (mostly) gave up country music, the other a business degree to pursue opera

One gave up a dream of being a country singer, the other of getting an MBA, but both Idaho State University students competing Oct. 29 for a shot at singing for the Metropolitan Opera have a passion for opera.

The two Idaho State University students are senior performing arts majors Teaira Burge and Jared Johnson.  They'll be trying out at the Metropolitan Opera’s Eastern Washington, Idaho and Montana District Auditions at ISU's Jensen Grand Concert Hall in the Stephens Performing Arts Center. Each of their primary ISU professors say they have legitimate chances at advancing in the auditions. 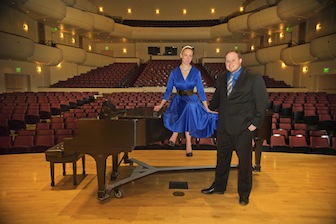 But a funny thing happened on the way to Nashville: Burge discovered her love and talent for classical, and then operatic singing. At age 6, she began singing in the Idaho State Children's Choir. Through that entity, she met her long-time voice teacher, Melanie Reynolds, who she began taking lessons from at age 12. Since then, she’s been trying to improve and expand her singing talents after discovering a love for a different musical genre.

"She is incredibly talented," said Kathleen Lane, ISU professor of voice, of her student, Burge, and who also taught Reynolds. “It's just as important that she has the work ethic she does, because she is a hard worker and strives to be excellent. I am sure she will succeed."

After graduating from ISU, Burge plans to move to Portland, Ore., to immerse herself in that city's opera music scene, and to take voice lessons from University of Oregon's Ruth Dobson, Lane's former voice teacher. Eventually, Burge, who still sings country tunes in her car, will attend graduate school in a vocal program.

In Pocatello, she has appeared last April in Theatre/Dance ISU and the ISU music department’s "The Threepenny Opera" and she has appeared in numerous productions of the Gateway Foundation for Theatre and Dance, the Astoria Music Festival and the Summer Repertory Theatre in Pocatello.

"Teaira is an incredible actress on stage," said Lane, "and she s a coloratura soprano, which mean she does spectacular, decorative passage works and sings some very impressive, very high notes." 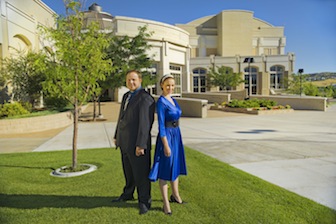 While Burge is a coloratura soprano, Johnson, 23, and who graduated from high school in Filer, Idaho, is a baritone. Johnson and his wife, Emily, have a 16-month-old son, Lucien.

"I came to ISU as a business major before, as they say in the music department, I was converted over to the 'dark side' and became a performance major after taking a choir class," said Johnson, who started performing in small-town musicals when he was 14. "Dr. (Scott) Anderson and Professor Lane lobbied for me to pursue vocal studies because they said I really have a shot at this."

His major professor, Anderson, believes in his student.

"Jared Johnson has talent and a great work ethic," Anderson said. "He has the kind of voice and talent that will lead to some type of professional musical career in singing, whether or not he becomes a household name."

In return, Johnson, a huge fan of the ISU music department, now believes his ISU mentors.

"I decided to go with something I have a passion for, that started off as a curiosity," Johnson said. "Opera was something I'd listen to for fun, but with the support of people around me, I am giving this a shot. I've come this far and I'll keep going. I hope to sing for the Metropolitan Opera someday and on some of the world's biggest stages. I love performing."

He has twice attended the renowned "Si Parla, Si Canta" Italian language and Opera program in Urbania, Italy, organized by Benton Hess of the Eastman School of Music in Rochester, N.Y. Johnson attended for four weeks in 2009 and six weeks in 2011. At "Si Parla, Si Canta," he not only expanded his musical and language repertories, but also met several famous opera singers and many talented students from around the world.

"It was great studying with Benton Hess and some of the greatest coaches and artistic directors in the world," Johnson said.

The two ISU students auditioning for the Met share at least two other things – the conviction that performing in the auditions in the Stephens Performing Arts Center is a plus for them and that they come from a quality music program.

"The Stephens Performing Arts Center, there’s nothing like singing in it, and it will be nice to have the home-field advantage singing in the Jensen Hall," Burge said. "If I was coming from out of town I might feel intimidated in it.”

Johnson said the education and support he’s received from ISU should prepare him well for the audition.

“We have an interested, involved, and dynamic music department here at ISU where they are all about cultivating the best possible sound,” Johnson said. “Every one works to better the individual musician and because of that the department as a whole is improved.  I am proud to be from this program."