Opera is alive, well and growing in Southeast Idaho, and Idaho State University has scored a cultural coup by landing a Metropolitan Opera National Council district audition, which is the a preliminary tryout for the most prestigious opera company in the United States.

The auditions, open to public, will be held Saturday, Oct. 29, beginning at 1 p.m., in the Joseph C. and Cheryl H. Jensen Grand Concert Hall of the L.E. and Thelma E. Stephens Performing Arts Center.

This is the first time these auditions, for the Metropolitan Opera's Eastern Washington, Idaho and Montana District, have been held in Idaho. 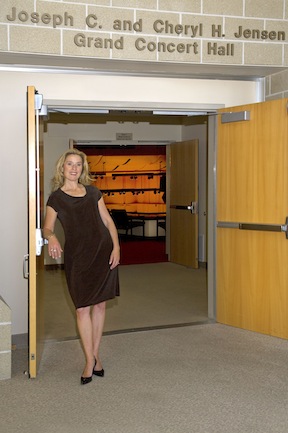 "This is such an great opportunity for the University and the community and our two students," said Diana Livingston Friedley, ISU professor of voice and audition director. "This is the first time a music competition of this magnitude has been hosted in Pocatello, and we are delighted that the Metropolitan Opera has granted us permission to host the district-level round."

Idaho State University was able to land the auditions primarily because of the quality of the Jensen Grand Concert Hall as a singing venue and the reputation of its choral programs.

"Probably the most important reason we were considered a viable site is the Stephens Performing Arts Center, in my opinion, the premier performing venue in the Northwest," Livingston Friedley said. "Its acoustics are unbelievable and everybody who performs there can't believe it is here in Pocatello. We are lucky to have this world-class venue. People coming to this audition, including the international judges, are going to be floored by our facility.”

Livingston Friedley also noted that ISU's choral and vocal programs, although relatively small, are also well respected by peer institutions, and that was helpful in landing ISU as the audition site.

Although the audition is in the Metropolitan Opera's Eastern Washington, Idaho and Montana district, organizers hope to attract singers from Utah, Oregon, Alaska and Western Canada. Winners of the district audition advance to the Northwest Regional Competition in January at the University of Washington in Seattle.

"We're really hoping for members of the community to come out and support the ISU choral program and these prestigious auditions on Oct. 29," said Scott Anderson, ISU choral director. "The participants will be singing at a very high level, with great accompaniment."

Audience members are invited to participate in the judging by casting their votes for an "Audience Choice" award.

The Met's National Council Auditions are designed to provide visibility to promising young opera singers and to assist in the development of their careers. The auditions are held annually in 15 regions of the United States and Canada. Within those regions are 45 districts, each providing an opportunity for talented singers to audition at the local level. National Council members and volunteers in each region conduct the auditions.

Winners of the district auditions advance to their region finals where they compete to win a trip to New York to participate in the National Semi-Finals, a competition held on the stage of the Metropolitan Opera. Approximately 10 of the Semi-Finalists will be selected as National Finalists and will compete the following Sunday in a public concert, the Grand Finals Concert, accompanied by the Metropolitan Opera Orchestra. The jury will award up to five Grand Winner Awards of $15,000 each. The remaining National Finalists will receive $5,000 each. Those singers who were National Semi-Finalists but did not advance to the National Finals will be given $1,500 to further their studies.

The Idaho State University auditions will feature quality judges, including soprano Heidi Grant Murphy, one of the outstanding vocal talents of her generation, who is now on the faculty of Indiana University's Jacobs School of Music; Mark Junkert, executive director of Opera Idaho; and Gayletha Nichols, executive director, Metropolitan Opera National Council Auditions.

Volunteers interested in donating time or money to support this competition and the young artists who will be singing, can contact Diana Livingston Friedley at 208-282-2611 or lividian@isu.edu.

Admission to the auditions is adult, $8; faculty and staff, $6; and pre-college $4. The Stephens Center Box Office will open at 11:30 a.m. the day of the event.