The Idaho State University Symphonic Band will be joined by the Century High School Concert Band in a special performance at 7:30 p.m.  Friday, Oct. 21, in the Jensen Grand Concert Hall of the ISU Stephens Performing Arts Center.

Colin Brien has directed of the Century High School Band program for the past three years. Brien is a 2004 graduate of Idaho State, and has composed and published a number of works for concert band. 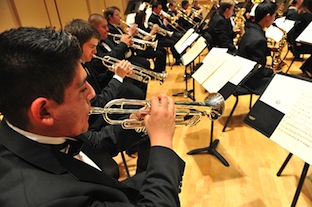 The ISU Symphonic Band will present of varied program ranging from traditional marches, to music based on 19th-century American church hymns, to more modern music that depicts events in nature.

Soloist for this concert will be Ulises Ramirez, trumpet, performing the exciting "Concert Etude, Op. 49," by Russian composer Alexander Goedicke.  Originally from Rigby, Ramirez is in his third year as a music performance major at Idaho State.

The Symphonic Band is under the direction of Patrick Brooks, ISU director of bands.

Ticket prices for ISU Bands concerts are as follows: $8 adults, $6 ISU faculty and staff, $4 pre-college students, and free to ISU students. Children under the age of 6 will not be admitted into concerts.