Besides protecting sheep and cattle from predators on Western rangelands, large breeds of livestock guardian dogs such as Akbash and Great Pyrenees may have other beneficial effects on the livestock they guard.

Livestock guardian dogs and the sheep they protect have been outfitted with GPS collars by Idaho State University researchers, working in cooperation with Oregon State University and USDA Agricultural Research Service researchers at the U.S. Sheep Experimental Station near Dubois. In one study, the researchers found that sheep accompanied by livestock guardian dogs moved more freely and covered a greater distance than sheep that were not accompanied by guardian dogs. During the timeframe of the study, the sheep also moved increasingly more as the study progressed. 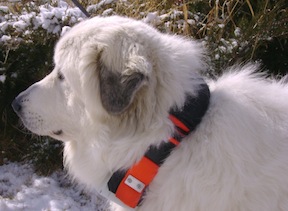 "The whole idea of the study was to see if sheep that were accompanied by livestock guardian dogs behaved differently," said Keith Weber, director of the ISU GIS Center, who is working on these studies with ISU graduate student Bryson Webber.

"And what we found was that sheep accompanied by the dogs moved more freely," Weber continued, "and we now have the statistical data to back up anecdotal observations. The sheep are probably spending more time feeding and moving, not looking up so often to check for predators."

Sheep that are less stressed are healthier animals that may gain more weight, have lower health costs and are of higher value. In a new wrinkle of their studies, this group of researchers at the 28,000-acre U.S. Experimental Sheep Station may start testing the stress level of the livestock in these GPS studies through simple available tests.

The study has larger implications, too, if ranchers and herders begin recognizing the value of livestock guardian dogs, according to Weber. While there is a polarizing debate going on regarding predators, particularly wolves, and livestock in the Intermountain West, Idaho State University researchers may have found a partial middle ground in the form of man’s best friend.

Both sheep and guard dogs were outfitted with GPS collars that record information around the clock.  The research team is further analyzing this data to help understand the behavior of livestock guardian dogs, too.

"The livestock guardian dogs are definitely most active at dusk, the same time predators tend to begin moving," Weber said. "The dogs are out there marking their territory to protect their sheep."