Using only a tooth, researchers at Idaho State University can help solve ancient archeological mysteries – for example, determining what someone ate hundreds of years ago on Easter Island or tracing the genetics of 2,000-year-old Roman slaves – by utilizing new technologies and methods.

"One single tooth from a skeleton can tell you a whole lot of things," said John Dudgeon, Idaho State University anthropology assistant professor, who, among other duties, is the director of the ISU Anthropology-Biology Ancient DNA Extraction Laboratory. 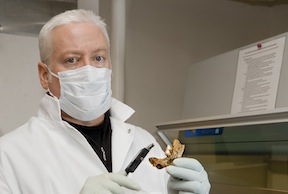 Dudgeon, whose specialty is "bioarchaeology," and his students can extract residues from teeth and other skeletal fragments, such as old or "ancient" DNA, stable isotopes of carbon and nitrogen and microfossils of plants eaten by prehistoric people and animals, by using the DNA Extraction Laboratory, scanning electron microscopy and other advanced instrumentation in the ISU Center for Archaeology, Materials and Applied Spectroscopy.

One major area of Dudgeon's research is studying the archaeology of Rapa Nui, also known as Easter Island, which is an isolated Polynesian island in the South Pacific Ocean. The island is a World Heritage Site famous for its monumental statues.

By examining teeth approximately 400 to 800 years old from Easter Island, Dudgeon has been able to expand the understanding of its ancient peoples. 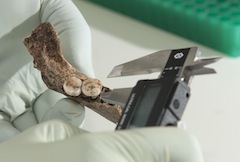 "We can perform a kind of genetic 'pedigree' analysis to see who they are related to, from the standpoint of their close kin on the island and more distantly, to their ancestry from other islands. We can also do stable isotope analyses that allows us to understand aspects of diet, such as how much terrestrial, or land-based protein they've consumed, versus how much marine-based protein they've consumed,"” Dudgeon said.

These discoveries give Dudgeon and his colleagues many clues about the lifestyle and use of the land by the ancient inhabitants of Easter Island. His studies suggest, for example, that most of the protein the inhabitants consumed was terrestrial, rather than marine.

"They relied on terrestrial protein mostly, even though they lived on a remote, relatively cold and barren island, without much to eat that they didn't bring with them," Dudgeon said. "We find of a lot of rat and chicken as protein sources, but not much evidence of marine protein, like fish or sea mammals." 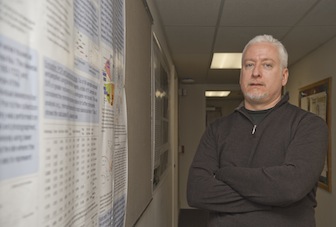 The genetic sampling provides a lot of important information. From the teeth collected from 13 skeletons at one site on Easter Island, Dudgeon was able to determine that three of the people were directly related to each other.

"It is amazing we can look at these ancient remains and determine very precisely how closely people are related to one another," Dudgeon said.

Additionally, genetic testing can also help address other unresolved questions. Dudgeon is hoping by examining the DNA of ancient Easter Islanders, he can trace the genetics of those residents to identify more precisely where the residents of Easter Island and other Polynesian Islands originated.

"With the studies we've done, we've already determined that the residents of Rapa Nui were more genetically diverse than what was previously thought," Dudgeon said.

Dudgeon and his colleagues from Vanderbilt University in Tennessee will soon begin a project to do DNA analysis of about 110 teeth from Roman slaves that are about 2,000 years old to try to determine where the slaves originated. By tracing the genetics of the slaves, using only the teeth as samples, researchers can learn much about ancient Rome. Dudgeon has been contracted by the international Roman DNA Project to complete analysis of the slaves’ teeth and will likely begin that study by year’s end.

These new technologies and advanced methods are allowing researchers to be much less obtrusive in completing their studies. They can now glean as much information from a small fragment of bone or tooth as they could previously learn from a whole human skeleton. As is the case with the Roman DNA Project, it is much easier to ship and obtain a number of teeth than to receive 110 skeletons to complete the research.

Dudgeon touted the resources available at Idaho State University and the special services the institution can offer, such as ISU's Molecular Research Core Facility.

"With the equipment, protocols and expertise we have in place, these projects could really put ISU on the map, in terms of biomolecular archaeology," Dudgeon said. "We can do a number of things particularly well here at ISU which can allow us to analyze archaeological samples from around the world. We're on the cusp of doing some amazing things with something as small as a single tooth. No pun intended."