Hallaq produced, directed, wrote and edited the video that was designed to instruct workers in laboratories where radiated material is present to avoid excess exposure. The video was shot on location at the Center for Advanced Energy Studies building in Idaho Falls using students in the mass communication department’s television broadcast program to fill other crew positions. 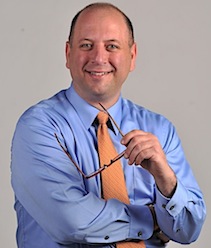 The EMPixx Awards is sponsored by the American Pixel Academy (APA), a coalition of professionals and educators in the field of electronic moving pixels. The APA was founded in 2008 with the goal of connecting creative visual professionals in the pixel media with educators who are giving wings to the next generation of creative professionals.

Comments from the judges for Hallaq's video include, "Good opening that gets the attention. Good casting; believable presenter" and "Good pacing and editing. Does a good job of telling the story."

There were 168 pieces selected for the EMPixx Platinum Award, the highest level. An additional 206 entries were named as EMPixx Gold Award winners. Entries came from throughout the United States and Canada. The broad award categories include TV commercials, TV programs, Corporate Videos, Internet Moving Pixels and Independent Films and Videos.

Entries are judged on a standard of excellence, from the professional industry and focus on the individual’s craft skills. Entries scoring 9.0 or higher on a 10-point scale qualify for the Platinum Empixx award. Those scoring 7.0 to 8.9 qualify for the Gold EMPixx Award. Hallaq's production achieved a score of 8.7.

The Empixx Award statuette is unique to the industry.  Whereas most awards in the creative world are "stylized people," The Empixx Award represents the transition from film to pixels.  It is an award that stands out from all the others in the industry – one that symbolizes Moving Pixels.