Idaho State University English Professor Susan Swetnam was honored this month in Boise when she was named to the Honor Roll of Philanthropic Heroes for her work during the past year with Silver Sage Girl Scout Council.

She was honored at the annual Idaho Heroes in Philanthropy Celebration put on by the Idaho Association of Fundraising Professionals. 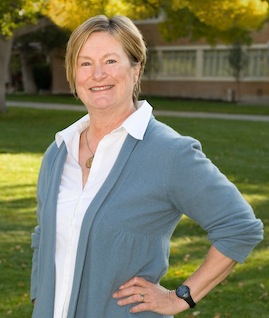 In anticipation of the Centennial of Girl Scouts, USA in 2012, Swetnam has raised more than $8,000 to support a project tracing the 90-year history of Girl Scouting in southern Idaho. Swetnam conceived this project and is serving as its director and scholar.  She was the only individual from eastern Idaho honored at the November banquet.

The funds she raised will be used to train and equip Girl Scouts to do oral history during the summer of 2011 using some of Swetnam's own research, which will be published in early 2012 in an illustrated 100-page book. These funds will also be used to purchase a traveling museum exhibit and to sponsor Idaho Humanities Council Speakers Bureau talks around the state.

Silver Sage Girl Scout Council reaches more than 8,000 girls and 2,000 adults in Idaho. This is the first time its history has been recorded.  The initial project component to appear will be an article Swetnam wrote for Idaho Magazine, slated to be published in January.

Swetnam was chosen for the award by Larry C. Johnson of M.E. Grace and Associates, National Philanthropy Day sponsor and Board Member of the Association of Philanthropy Professionals in Idaho.