"I want to increase exposure of the 'I Love ISU' campaign," said Dickey, who came to ISU after three years at the University of Florida, as director of its Florida Fund. "We've had a great presence in Southeast Idaho and I want to bring that same kind of awareness to who state. This year we're moving call centers to Twin Falls and Boise during the campaign." 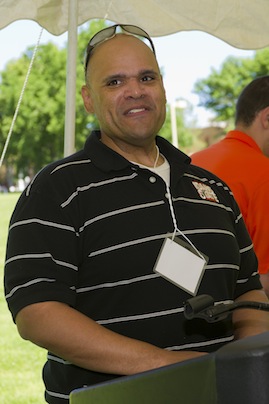 Callers will also be calling from Pocatello, Idaho Falls and Blackfoot.

"We want to create more scholarships for more students becoming even more prevalent across the state than we are now," said Dickey, who began at ISU last October.

For the first time, the monies raised in each of the calling locations will be devoted to scholarships for students living in those communities.

A native of West Lafayette, Ind., Dickey graduated from Purdue University with a communications degree and minors in business and Spanish. He worked for Purdue in its development office for three years before taking a job at Ohio State University as associate director of annual giving for two years.

Between his time at the University of Florida and Ohio State, he had his first director’s job at Embry-Riddle Aeronautical University in Daytona Beach, Fla.

"I am really excited about this year's 'I Love ISU' team," Dickey said. "We have two excellent chairs, Michele Pond- Bell and Deb Thompson, and we have an enthusiastic and devoted group of team captains leading our callers."

Dickey also expressed his appreciation for the continued support of two McDonald’s restaurants in Pocatello that will again feature "McLove ISU" night from 5 to 7 p.m. Sept. 15, when a portion of all sales will go directly to scholarships for ISU students. The new director said he was pleased that this year the Pocatello Sonic Drive-In will also feature an "I Love ISU" night on Sept. 9 from 5 to 8 p.m., with a portion of all sales going directly to ISU scholarships.

"We're pleased to have McLove at two locations again and we have also expanded to include Sonic," Dickey said. "These are examples of the creative ways we can help our students, and we hope to raise a record amount in support of students, who need the support now as much as ever."