Former Idaho State University President Myron "Barney" Coulter, who led ISU from 1976 to 1984, died in Waynesville, N.C., on Tuesday, Oct. 4, after a long battle with cancer. He was 82.

"President Coulter was a great colleague and friend," said ISU President Arthur C. Vailas. "He cared very much about the future of higher education and its impact on our country. He will always be remembered by ISU and our community. Laura and I will miss him very much." 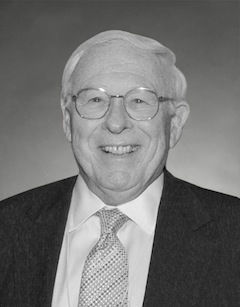 During his tenure as president at Idaho State University, Coulter helped see the University through financial struggles, while creating new programs and opportunities.

While living at the Servel House, Coulter and his wife, Barbara, oversaw extensive upgrades and remodeling to the home.

He also worked with the State Board of Education to ensure ISU be granted the "health professions and related biological and physical sciences" as a primary mission. He established the Center for New Directions and the ISU Ambassadors. In 1981, Coulter and ISU athletic director Babe Caccia hired then –unknown coach Dave Kragthorpe who led ISU to its only Division I-AA football championship in 1981. The "I Love ISU" scholarship fundraising campaign also began during his tenure in 1983.

Barbara was extensively involved in campus activities and the ISU Women's Club.

Coulter was preceded at Idaho State University by William E. "Bud" Davis as president and followed by Richard L. Bowen.

After leaving ISU, Coulter assumed the Chancellorship at Western Carolina University, where he served for a decade.

The Coulters have been strong supporters of ISU through the Annual Fund, supporting scholarships for "I Love ISU," the Sagness Endowment in the College of Education, Stephens Performing Arts Center, Chick and Diane Bilyeu Theater, Taylor Graduate Fellowship, Rendezvous Complex and the College of Arts and Letters, College of Science and Engineering and the College of Technology.

He previously was associate professor of education at the Pennsylvania State University from 1964 to 1966, director of Penn State’s Latin American Education Project from 1962 to 1963; and instructor of education at Indiana University from 1958 to 1959. He also was an elementary school teacher in the Bloomington, Ind., Metropolitan Schools from 1954 to 1956, and an English teacher and athletics coach at Reading, Mich., Community High School from 1951 to 1952. He served in the U.S. Army from 1952 to 1954.

A native of Albany, Ind., Coulter lived in Waynesville, N.C., after his retirement as chancellor. He is survived by his wife, Barbara Bolinger Coulter; twin children, Nan and Benjamin; and granddaughters Mary Elizabeth Coulter and Abigail Kristine Coulter.