Idaho anglers are thrilled this summer by the large run of Chinook salmon returning to Idaho streams that bring a giant surge of life into the Salmon River system and to the Snake River below Hells Canyon Dam.

As of early July, about 120,000 adult Chinook had crossed over Lower Granite Dam on the Snake River, the last dam on the Columbia/Snake River system that salmon must cross before entering Idaho waters. This year’s run is more than two-and-one-half times greater than the average Chinook run of the last five years. 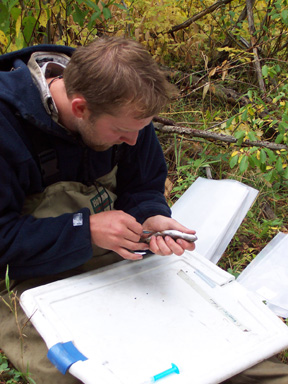 Fishermen are lining the banks for a chance to hook and battle one of these powerful anadromous fish, and wildlife benefit from the return of the fish in other ways. Researchers from Idaho State University and other regional universities are helping with an Idaho Department of Fish and Game project that is showing that salmon, both dead and a live, play a very important role in the health and vitality of Idaho’s ecosystems by restoring nutrients.

Wild salmon, which return to their native streams to spawn and then die and decompose, are particularly beneficial to ecosystems. Hatchery fish that return to hatcheries are less beneficial unless their carcasses are put back into streams to provide nutrients.

Researchers are putting treated salmon carcasses, pelletized fish tissue and inorganic fertilizers in sections of Idaho rivers that have been dammed and salmon can no longer return. They’re testing how salmon nutrients benefit streams.

“We’re doing this as mitigation for the development of the federal hydropower system, receiving money via the Bonneville Power Administration who mitigates for fish and wildlife impacts as directed by the Northwest Power Act,” said Gregg Servheen, Idaho Department of Fish and Game Wildlife Program Coordinator, and the leader for this salmon nutrient study. “One thing Idaho State University researchers have found is that fish are growing faster and growing larger in our treated streams. We’re studying the effects of our mitigation as we implement it, but we’re just at the beginning of our studies.” 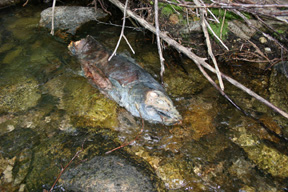 “In the streams that have been dammed we’re seeing increased fish growth for resident fish in the sections that have been treated with salmon nutrients,” said doctoral student Scott Collins, ISU’s lead graduate student on the project from the ISU Stream Ecology Center. “We’ve also found an increase in the number of aquatic and terrestrial insects in the riparian zone.”

So far, researchers have dumped salmon nutrients in nine different tributaries of the North Fork of the Boise River. Three sites were treated with dead salmon, three with processed salmon nutrients and three were used as control sites. Eventually, other forks of the Boise, Weiser and Payette rivers may be studied and treated to see how salmon nutrients affect the streams and their entire adjoining ecosystems or watersheds.

“We’re looking to trace marine isotopes from salmon throughout the entire system to see how the salmon nutrients are benefiting plants and animals,” Servheen said. “Showing how these nutrients effect aquatic and terrestrial invertebrates and plant forage will also help us determine how terrestrial animals are benefited. We’re looking at bats and bears, deer and elk, in addition to the aquatic organisms.”

The ISU researchers are also beginning to track riparian spiders, an organism with a short life cycle, to see if their numbers or sizes increase as a result of insects. The spiders can be used as a model predator for other insect-eating organisms, such as birds or bats, to help determine how the salmon nutrients greater affect the stream ecosystem and how stream productivity can fuel terrestrial consumers.

Preliminary results indicate that the leftover nutrients from salmon runs have a healthy effect on Idaho streams.