May 14, 2010
ISU Marketing and Communications

Cathy Kriloff, Idaho State University Professor of Mathematics, was named Associated Students of ISU Club Advisor of the Year for 2010. 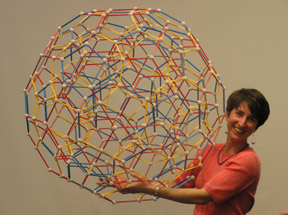 She has served as advisor or co-advisor to the ISU Math and Computer Science Club for 10 of the past 12 years after helping establish the club in 1998. In that time the club has sponsored many outside and local speakers, held a yearly career panel and two recent Sudoku competitions, conducted service activities, and united students interested in mathematics.  Kriloff has enjoyed working with numerous dedicated club officers and members, including an especially enthusiastic group this year.

Kriloff has been at Idaho State University for 13 years after receiving her Ph.D. at the University of Michigan and completing a two-year postdoctoral position at Oklahoma State University.  She has taught algebra at all levels, geometry, calculus, elementary analysis, and the language of mathematics, and developed a general education honors course in symmetry and a graduate course in representation theory.

Her research is on representations of algebras built from reflections of objects with five-fold and other non-crystallographic symmetry, including joint work with Yu Chen also of ISU, and she has served as graduate director for the Department of Mathematics for the past two years.