The correlation between cold dry weather and an increased incidence of prostate cancer may be due to the effects of weather on pollutants.

Approximately one in six men will develop prostate cancer in their lifetime, but the risk of cancer is higher in the north than the south. Idaho State University researchers, led by Sophie St-Hilaire, a research associate professor in the Department of Biological Sciences, suggest this pattern may be because organic pollutants, including some pesticides, precipitate out of the atmosphere at colder temperatures and thus may result in higher incidences of prostate cancer. 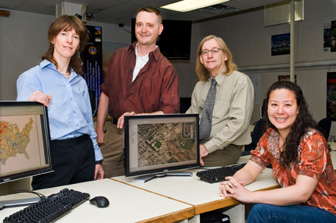 The results of the study will be published April 21 in the International Journal of Health Geographics.  The multidisciplinary team, which includes Drs. Sylvio Mannel, Dewayne Derryberry, and Rakesh Mandal, and a student Amy Commendador at ISU, studied the correlation between various weather parameters and the county level incidence of prostate cancer across the United States, controlling for a number of confounding variables.

“We found that colder weather and low rainfall were strongly correlated with prostate cancer,” St-Hilaire said. “Although we can’t say exactly why this correlation exists, the trends are consistent with what we would expect given the effects of climate on the deposition, absorption, and degradation of persistent organic pollutants, including some pesticides.”

Environmental chemists have been saying for over 30 years that pollutants such as PCBs and DDT are accumulating in areas of high altitude as well as high latitude.  Cold weather slows their degradation while also causing them to precipitate towards the ground, and rain and humidity also play important roles in their absorption and degradation.

“The findings from this ecological type of study are consistent with what we would expect from differential exposure to these kinds of pollutants,” St-Hilaire said.  “This study, funded by the ISU Office of Research, provides an additional hypothesis for the north-south distribution of prostate cancer, which builds on the existing supposition that individuals at northern latitudes may be more likely to be deficient in Vitamin D due to low exposure to UV radiation during the winter months.”

The ISU study suggests that in addition to vitamin D deficiency, a vitamin that is protective against certain cancers, other meteorological conditions may also significantly affect the incidence of prostate cancer, added St.-Hilaire.

Idaho State University, a Carnegie-classified doctoral research institution founded in 1901, educates approximately 15,000 students per year in more than 280 programs. It is Idaho’s lead institution in health professions and medical education. Its seven colleges engage in a broad range of innovative research, teaching, and learning in the natural and physical sciences, humanities, performing and visual arts, education, engineering, business, pharmacy, and technology. Visit ISU today at www.isu.edu.