Local veteran to be honored by ISU for art donation

The office is located on the lower level of the Rendezvous Complex at the southwest end of the Atrium. 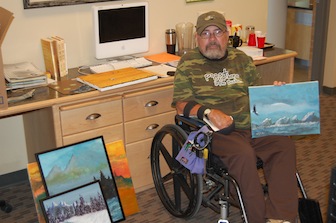 Quigley, a resident at the Idaho State Veterans Home in Pocatello who lost the use of his right leg and arm due to a stroke in 1997, recently donated several paintings to the Sanctuary for display.

Quigley discovered his enjoyment of painting in 1985 when he took an art class in Idaho Falls. A decade later, he retired from his 35-year career at the Idaho National Laboratory. He had planned to spend his time indulging in his passion for painting. However, in 1997, he suffered a massive stroke. He spent a year relearning how to walk, although he still has very limited use of the right side of his body.

About three years ago, Quigley picked the brush back up again after some coaxing from the staff at the Veterans' Home.

In honor of Quigley’s generous donation to the Veterans' Sanctuary, The Sanctuary and Veterans' Club will present him with a certificate of appreciation during Tuesday's club meeting. For more information, contact Casey Santee at (208) 282-4298.