The National Women's Studies Association (NWSA) selected Rebecca Morrow, director of the Janet C. Anderson Gender Resource Center at Idaho State University, as its representative to the Board of Directors for the Council for the Advancement of Standards in Higher Education (CAS). 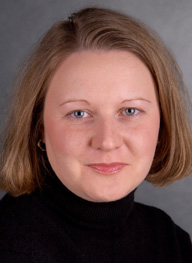 Morrow began her appointment in mid-October.

Established in 1979, the mission of CAS is to promote the improvement of programs and services to enhance the quality of student learning and development.  CAS is a consortium of professional associations who work collaboratively to develop and promulgate standards and guidelines and to encourage self-assessment.

"It really is an honor for me to serve in this new role," Morrow said. "Given my service as the NWSA Women's Centers Committee co-chair for the past two and a half years, I have gained a great deal of insight into the thoughts and concerns of my women's center colleagues from across the nation. I am pleased to have the opportunity to act as their voice during these critical discussions with fellow representatives from professional associations across the co-curriculum."

As the director of the Anderson Center for the past eight years, Morrow has helped expand the center’s offerings, including establishing the annual Art of Gender in Everyday Life Conference. The center is also home to the WISE HIV prevention program and provides campus education and awareness events about sexual and domestic violence and stalking.  Morrow has served on the NWSA Women's Centers Committee since 2006, overseeing the "What Women's Centers Need" project and as Co-Chair, a role ending Nov. 14.

Morrow’s ongoing commitment to university gender centers began with her position, from 1999 through 2001, as assistant to the director at the Institute for Research and Education on Women and Gender at the State University of New York at Buffalo, the institution where she earned her doctorate.

Her work continued with an international emphasis during a 2001-02 Fulbright Fellowship at the Gender Studies Centre at Vilnius University in Lithuania. An anthropologist by training, Morrow has also conducted two grant-funded fieldwork projects in Ireland. She received her undergraduate degrees in anthropology and music performance from Oberlin College.

Morrow is excited about her new role within the CAS governing structure.

"It was an incredible experience to be a part of my first CAS board meeting in October," Morrow said. "We discussed the updated Standards for Admissions Programs and LGBT programs and services as well as the veterans and military programs and services standard, which is a brand new standard. I look forward to the opportunity to really get to know the standards for a significant number of co-curricular areas as well as develop an understanding of the history and reasoning that informs the standard-specific content for the different areas."

Existing standards cover a broad range in the co-curriculum as represented by nearly 40 professional association members, with new standards added on an ongoing basis. Standards are reviewed on a decennial basis with the women student programs and services standards are scheduled to begin review within the next couple of years.

"This is an exciting time for assessment in the co-curriculum as ever greater numbers of colleges and universities are recognizing the student learning that takes place outside the classroom. CAS provides a solid framework in which to document that such learning is taking place, and I'm thrilled to be a part of ensuring that the standards are the best that they can be," she said.

If you'd like more information about the Anderson Center, NWSA or CAS, or to schedule an interview, please contact Rebecca Morrow at 282-2805 or gndrctr@isu.edu.