Douglas A. Sayer, founder and president of Premier Technology, Inc., will be recognized as “Idaho Business Leader of the Year” at the showcase event of the Delta Upsilon Chapter of Alpha Kappa Psi, the professional business fraternity at Idaho State University.

The dinner event will be held in the L.E. and Thelma E. Stephens Performing Arts Center at Idaho State University on Thursday, March 12. 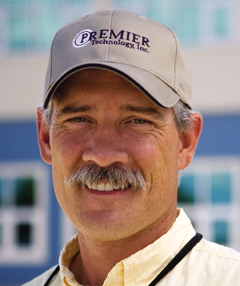 The award annually recognizes an Idaho business leader who has demonstrated outstanding business and professional ethics while contributing significant support to worthwhile community, civic and education activities. Awarded by ISU College of Business students since 1959, previous honorees have included a congressman-elect, former governors, entrepreneurs and leaders of some of Idaho’s largest companies. The recognition program is the longest-standing such program in Idaho.

Premier Technology, Inc. which was formed in 1996 with only three employees, began by making equipment to improve the way French-fries were battered. The company went on to develop a number of innovative products for the food processing industry.

Under Sayer’s leadership, the company has grown into an engineering, design and fabrication company with more than 350 employees. Company facilities in Blackfoot, Pocatello and Twin Falls serve the nuclear, chemical, mining, pharmaceutical, medical and defense communities while remaining a major player in food processing. The company’s products include structural decks, tanks and silos, sanitary piping, conveyors and radiation shielding and equipment.

The company has joined the ranks of the top 75 Idaho private companies, now ranked in 56th place, up from 83rd place last year.

Employee development at Premier is reflected in the company’s mission statement, which is prominently posted at the entrance to Premier’s corporate offices in Blackfoot: “To develop our people into the leaders of the industry, while providing our customers with the highest quality service.”

Sayer is also committed to Rural Idaho Outreach Partners (RIOP), which aims to build workers’ employable skills in some of the state’s rural areas. One Salmon-based firm, Commander Chassis, has already performed nuclear quality machining work for Premier. Premier Technology has also announced plans to open a plant in Sayer’s hometown of Mackay in early 2010. The plant will employ 10 to 50 workers.

In addition to generous support of community charities, foundations and organizations, Sayer has also been a supporting member of Employer Support for the Guard and Reserve since 2004. Premier Technology was recognized with the “Employer of Veterans” award from the Idaho American Legion in 2008.

Ticket and table pricing information will be available soon. For more information now, contact Cassey Newbold, Alpha Kappa Psi Idaho Business Leader of the Year chair, at (208) 241-8099 or by e-mail at newbcass@isu.edu.

2002    ISU Centennial, all past winners honored