BOISE  – Mel Morgan, 91, a longtime booster of Idaho State University athletics and a co-founder of the ISU Bengal Foundation, died Tuesday, June 9, in Boise. Morgan had been suffering from Alzheimer’s disease and recently broke his collarbone in a fall.

ISU recognized the importance of Morgan’s contributions to its athletic programs in 2004 by selecting him as only the second recipient of the ISU Sports Hall of Fame’s Lifetime Achievement Award. 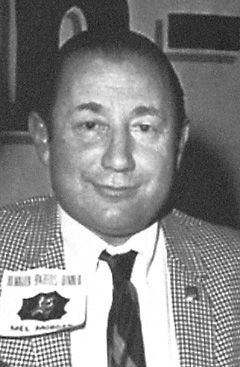 “When we were starting up boxing in the late 1940s and Dubby (Holt, late athletic director and boxing coach) began our tournament (Intermountain Invitational), he couldn’t get a lot of teams to attend, because the Pacific Coast Conference Tournament was at the same time,” Caccia said.

“Then people saw the watches Mel donated as awards for the champions and we had as many boxers to compete as we wanted. At that time, Mel Morgan was the best booster Idaho State had,” Caccia said.

Morgan and Brick Thompson were the founding members of the ISU Bengal Foundation in 1946. The organization, then known as the Gridiron Club, continues to raise money to pay for athletic scholarships.

Morgan’s father, Nate Morgan, immigrated to Pocatello in 1914 and started Nate Morgan Jewelers. Mel succeeded his father in operating the business, which generously supported ISU’s academic and athletic programs. He eventually retired and moved to Boise.

An announcement of funeral arrangements is pending.