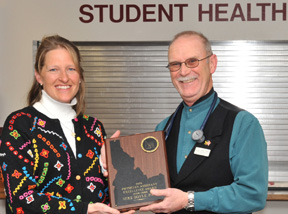 Doyle, who works in the ISU Student Health Center and is an adjunct faculty in the ISU Department of Physician Assistant Studies, was honored at a short ceremony in Pocatello today, April 9, and was honored at the IAPA annual conference in Sun Valley on April 3.

“You never do things for awards,” Doyle said. “You just do what you think is right.”

Doyle started his medical career during the Vietnam War as a U.S. Navy Hospital Corpsman taking care of Marines from 1968 to 1971. He attended the George Washington University Physician Assistant Program and graduated in 1975. Walter Stein, the former director of the ISU PA Program, was one of his professors.

After graduating from PA school Doyle worked in a Maryland family practice. In 1990 he moved to Idaho and worked for Health West in Lava Hot Springs. Doyle also worked for ISU at the time Dr. Joan Martin was starting ISU’s PA program. Doyle was instrumental in recruiting its first director, Walter Stein.

Doyle also is a Lieutenant Colonel in the Air Force Reserve, serving from Hill Air Force Base in Utah.

Doyle has a strong reputation nationally among PAs and in 2000 was awarded the Outstanding Uniform PA of the Year by the Veterans Caucus of the American Academy of PAs. He has worked in rural, military and academic settings.