Cuban poet and scholar Enrique Sacerio-Garí will give three free public presentations on the theme “The Arts in Contemporary Cuba” April 2 and 3 on the Idaho State University Pocatello campus.

Sacerio-Garí’s presentations, which include a lecture, film showing and poetry reading, are sponsored by the ISU Department of Languages and Literatures, which received a mini grant from the Idaho Humanities Council. 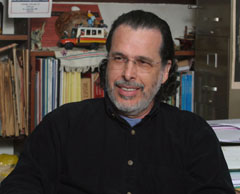 His schedule is as follows:

• Thursday, April 2, 7 p.m., Rendezvous Planetarium, showing of the film “Suite Habana” (2004), directed by Fernando Pérez and winner of awards for best film, best director, and best music at the Festival Internacional del Nuevo Cine Latinoamericano. A discussion of the film led by Sacerio-Garí’s will follow its showing.

• Friday, April 3, 7 p.m., Rendezvous Planetarium, poetry reading by Sacerio-Garí, who will read poetry in English and Spanish, including selections from his collection “Poemas Interreales.”

Sacerio-Garí is the Dorothy Nepper Marshall Professor of Latin American and Hispanic American Studies at Bryn Mawr College in Pennsylvania. He received his Ph.D. in Latin American literature in 1978 at Yale University and is a Cuban poet, essayist and scholar who has published and lectured extensively on Jorge Luis Borges, José Martí, José Lezama Lima and on contemporary Cuban film.

He is an advocate for the opening of dialogue between Cuba, the United States government and the Cuban-American community. Sacerio-Gari has published regularly not only in premier American scholarly venues in the fields of American and Latin American literature, but also in important venues in Cuba. The most recent edition of his “Poemas Interreales” (2004) was published in Havana by Editorial Letras Cubanas. In recent years his poems and essays have appeared in the most prestigious periodical journals focused on the humanities in Cuba.

Sacerio-Garí’s visit coincides with the 50th anniversary of the Cuban Revolution, which began on Jan. 1, 1959, and is arguably one of the most significant events in the history of Latin America of the 20th century.

Not the least of the revolution’s consequences has been the creation of one of the hemisphere’s most literate societies and the founding of institutions to foster the arts: the Casa de las Américas, which awards one of Latin America’s most prestigious literary prizes and the Instituto Cubano de Arte e Industria Cinematográfica (ICAIC), the Cuban film institute that sponsors Latin America’s longest-lived film festival, the Festival Internacional del Nuevo Cine Latinoamericano. Both of these institutions were founded within months of Fidel Castro’s coming to power in 1959 and have functioned with unbroken continuity for the last 50 years, despite Cuba’s changing political and economic fortune.

For information on Sacerio-Garí’s visit, contact Jim Fogelquist, chair, ISU Department of Languages and Literatures, at (208) 282-3717 or fogejame@isu.edu.