‘A Season of Note’ to present energetic Barrage concert Jan. 17

Idaho State University’s “A Season of Note” fine arts series will present Barrage, a fiddle playing multi-talented cast of performers that has entertained millions across the globe with an eclectic mix of music and dance, at 7:30 p.m. Saturday, Jan. 17, in the Joseph C. and Cheryl H. Jensen Grand Concert Hall in the L.E. and Thelma E. Stephens Performing Arts Center. 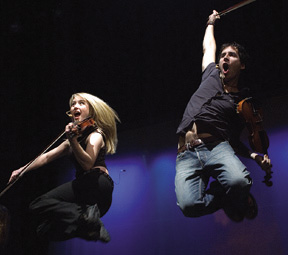 Barrage performances offer up a diverse fusion of cultures, musical styles and in performance vitality.

Since its creation in Calgary, Canada, Barrage has been featured many times at events worldwide having played for many presidents, prime ministers and princes. Barrage has also had their television productions aired on several international TV networks including the PBS network in the USA, the BBC in the UK and CBC in Canada and has performed live shows in New Zealand, Singapore, Taiwan, China, Canada, Finland, Sweden, Ireland, Denmark, Poland, Germany, Norway, Monaco, the United States and the United Kingdom.

“Barrage is too wow for words,” according to the Denver Post.

A critic for the LA Daily News noted, “After an evening of performing jigs on rocket fuel, its no wonder that more than a few horsehairs snapped on their bows.”

Tickets are $29 main level, $25 upper level and can be purchased at the Stephens Performing Arts Center Box Office, open from 10 a.m. to 4:30 p.m. weekdays during the school year.

More information on Barrage is available at http://www.barrage.ca/.