There is no cost for admission, however, an "at the door" goodwill donation of $5 is being asked to cover the students’ expenses. Doors open at 7 p.m. 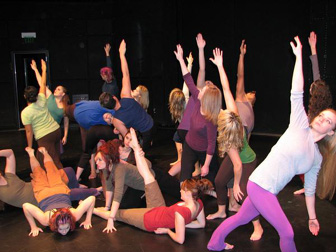 "DANSON in Concert" will display various styles of dance ranging from modern to hip hop and even a piece inspired by the well-known movie "Moulin Rouge." These works have been put together by eight student choreographers and one faculty member as a guest choreographer.

Danson was created in 1977 by Emeritus Professor Marcia Lloyd and six of her students.  Lloyd wanted to create more opportunities for students to dance.  In 1977 dance classes were limited at best. Today, the Department of Theatre and Dance offers more than 30 dance activity and dance technique classes.  Lloyd wanted to give students the opportunity to choreograph themselves and other students as well as bring in guest choreographers.

The tradition continues each semester; students audition for student choreographers and guests and then present their works in a final concert at the end of each semester. Danson had its very first performance in the fall of 1978 with 14 dancers. Today, Danson features more than 50 dancers performing in their concerts.

Over the past several years, Danson has created several opportunities for ISU students to participate or present work in the Danson concert.  Along with participation in the concert, ISU dance students are invited to attend the American College Dance Festival Association (ACDFA). Two pieces from the public concert are chosen to perform in a formal private concert at the end of the festival, and one piece is chosen to participate in an informal concert.

Even students who are not performing in either concert are still encouraged to attend and participate in the various workshops offered throughout the week.  In 2008, visiting Assistant Lecturer Rosa Visser's piece was not only chosen for the final concert at the festival but was selected to compete at the national concert in New York City.  A host of Danson students and faculty accompanied the piece to the concert and performed on the national stage for thousands in June 2008.

Throughout the years, Danson has worked diligently to try to involve ISU students in dance.  Along with The Department of Theatre and Dance, Danson has teamed up with other clubs to present student projects and most recently, the club has become fully active with many exciting presentations and involvement in community events each semester.