"The Unnatural World: Kirsten Furlong and William Lewis" is an exhibit that brings together two Boise-based artists for a two-person exhibition at the John B. Davis Gallery located in the Fine Arts Building on campus at Idaho State University that opens March 3. 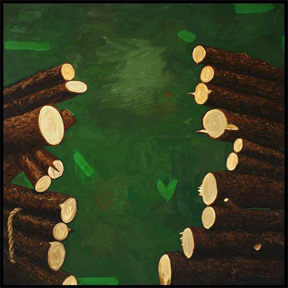 This event is sponsored by U.S. Bank in cooperation with the Connie Smith Bowen Art Series at Idaho State University. Artists, Kirsten Furlong and William Lewis will be in attendance at the opening reception on Monday, March 3, from 6 to 8 p.m. The dates of the exhibition are March 4-14 and the gallery hours are Monday – Friday from 10 a.m. to 4 p.m.

Kirsten Furlong’s recent work explores ideas related to the doppelganger and the genetic twin.  Her images are created using drawing and printmaking to combine the various aspects of mark making – from those that are mechanical or systemized to those that document the unique trace of the human hand. As an artist and an identical twin, she is interested in the cultural and scientific discussion of how genetic and environmental factors shape identities and physical bodies.  These images are also related to her recent artistic inquiry into how the natural world is represented and imagined. She currently works as the gallery director for Boise State University’s Visual Arts Center and is represented by the J Crist Gallery in Boise, ID.

Much of William Lewis’s recent body of work presents neglected objects or seemingly mundane occurrences in unremarkable settings. Upon encountering these objects and locales Lewis felt they were imbued with a special quality.  They stood forth as if offering important testimony – emerging from the general background hum of everyday experience.  The heightened sense of awareness triggered by these encounters was the impetus to paint.  Lewis believes it is important to trust this reaction to the world of objects.  By holding in memory what has riveted him in this way, and then painting from those memories – allowing (even welcoming) all the permutations that memory inflicts – Lewis attempts to communicate that initial sense of resonant meaning.  The J Crist Gallery in Boise, ID represents Lewis’s work and he currently teaches art at a high school in the Boise area.

Lewis’s work was selected for the 2007 Idaho Triennial exhibition. The 2007 Idaho Triennial exhibition will travel in an abbreviated version to the Prichard Gallery, University of Idaho, Moscow (February 20 – April 4, 2008) and to the Sun Valley Center for the Arts, Ketchum (April 18 – June 11, 2008). The Exhibition curator and juror Amy Pence-Brown selected 37 artworks to tour the state, including an oil painting by William Lewis, entitled Wood Pile, a recent gift to the Boise Art Museum from Anita Kay Hardy and Gregory Kaslo.