The congressional papers of U.S. Representative Richard Stallings, who served Idaho in Congress from 1984 to 1992, are now available to the public and to researchers at the Idaho State University Eli M. Oboler Library. 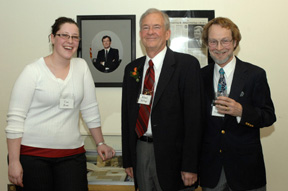 The material includes legislative files, correspondence and constituent casework from his Washington office as well as his regional offices in Idaho. While in Congress, Stallings, a Democrat, served on the House Agriculture Committee; the Science, Space and Technology Committee; and, the Select Committee on Aging.

In early February, the collection was officially opened with an invitation-only ceremony. Among the approximately 50 in attendance were Stallings, his wife Renee, family members and eight of his original congressional and campaign staff members. Speakers at the event included ISU President Arthur C. Vailas, Ph.D., and the chair of the Idaho Democratic Party, R. Keith Roark. Also in attendance were former congressman and current U.S. Senate candidate Larry LaRocco, Idaho Rep. James Ruchti and Pocatello Councilman Gary Moore.

“I am highly honored and deeply touched by this event,” said Stallings. “That the university put so much time and effort into organizing this collection is special. And with so many of my staff here, I am very touched.”

Stallings, who has been an adjunct professor at ISU, said other universities, including some from out of state, approached him for his papers, but said he felt loyal to ISU.

“I’ve always felt this area was key to my success,” said Stallings, who represented Idaho’s Second Congressional District. “I wanted to give something back, and they (ISU library staff) expressed interest in these papers and I kept my promise in delivering them. I really felt these papers belonged in southeast Idaho.” 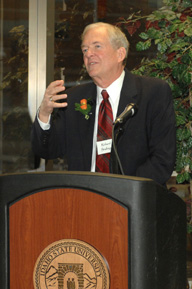 Of special interest to historians in this collection may be his work on the original Farm Bill in 1985, as well the follow-up 1990 Farm Bill, and the creation of Farmer Mac. The latter entity was created by Congress to improve the ability of agricultural lenders to provide credit to America’s farmers, ranchers and rural homeowners, businesses and communities. Many energy-related issue are also addressed including work on hydropower projects and the funding and activities of the Idaho National Laboratory. Also included in this special collection are publications, memorabilia and papers from his service as U.S. Nuclear Waste Negotiator from 1993 to 1995 for President Bill Clinton.

ISU officials noted that this is not an ordinary collection of congressional papers.

“I think this may be one of the most easily used collections of legislative records in our country,” said Leonard Hitchcock, professor emeritus, library special collections, who worked on organizing the collection. “The staff working on this indexing went several steps beyond the normal processing and organizing of the materials.”

“There is an inverse relationship between the amount of work staff do to prepare a collection, and the work required by researchers to use it,” Hitchcock said. “The extra lengths that we went to should make it easier for researchers to get what they need.”

A native of Ogden, Utah, the 67-year-old Stallings moved to Idaho and joined the faculty at Ricks College, now BYU-Idaho, in 1969 where he taught for 15 years. Following his time in Congress, Stallings has been executive director of the Pocatello Neighborhood Housing Services, an ISU adjunct professor, a member of the Pocatello City Council and chair of the Idaho Democratic Party.

"The collection is a true asset to ISU and to researchers, and we are honored that Representative Stallings decided to place it in our care,” said Karen Kearns, head of special collections and archives at the library.

Stallings’ congressional papers were donated to ISU in 1992 with the understanding that the collection would remain closed until 2008.