May 1, 2008
ISU Marketing and Communications

Idaho State University’s Rendezvous Complex is one of six campus buildings nationwide that have received a Facility Design Award from the Association of College Unions International. 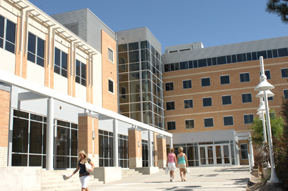 ACUI recognizes excellence in design of college unions as well as other student‐centered campus buildings. Entries were judged not only on the basis of the facilities’ appearance, but also on the process used to arrive at the design and how the new or renovated facility affected the campus. The building was designed by MHTN Architects, based in Salt Lake City.

Many spaces in the Rendezvous Center were created to serve multiple purposes, such as the planetarium. It can be a lecture hall or a movie theater. Meeting and conference rooms open to a five-story atrium plaza to allow for larger events like a campus festival.

The building also provides food services, Faculty Senate Offices, a math laboratory, the future home of the Center for Teaching and Learning and an art gallery. Fifty academic classrooms are included in the building, providing many options for students, faculty and staff.

A major feature of the complex is its 72 student apartments with capacity for 300 students. It also includes a drop-in computer lab on the second level,  and a spirit shop for ISU memorabilia, and a convenience store on the main level.

“We’re pleased the Rendezvous Complex received this award,” said Cheryl Hanson, architect, in Facilities Services. “The Rendezvous is really unique as a building type on a university campus. It is something a lot different than what has been tried on other campuses.”

The building is lending itself to collaboration and is turning into a meeting place for the campus. Its modern housing is also a plus in students’ eyes.

“Faculty, staff and students from upper and lower campus are appreciating its convenience and it is drawing them together,” Hanson said. “The building also features a lot of spaces where students, or students and teachers can collaborate. It’s bringing people together in ways we never even thought of.”Other entities receiving 2008 Facility Design Awards included:

Founded in 1914, ACUI is a nonprofit educational organization that brings together college union and student activities professionals from hundreds of schools in seven countries.