He has already genetically engineered a relatively simple plant, Arabidopsis, to make it more drought resistant. A Canadian researcher, Dr. Peter McCourt, has also been successful creating drought-resistant canola, another important commercial crop, using a similar method to what Crowell will use to produce drought-resistant potato and soybean plants. 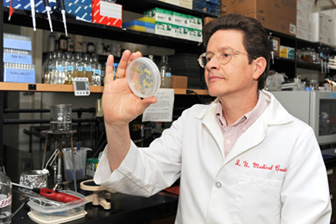 “I think I have good reason to be optimistic about the outcome of these experiments,” said Crowell, whose research is funded by a $465,000 National Science Foundation grant. “Because of Dr. McCourt’s success in Canada and my success with Arabidopsis, I am confident my research efforts will produce potato and soybean plants that are drought tolerant and produce a good crop.”

Crowell is manipulating potato and soybean plants to close their stomata, through which water is lost, more than normal plants under drought conditions. Stomata are the pores on the leaves and stems of plants that open and close to allow carbon dioxide to enter and oxygen and water vapor to leave the plant. This gas exchange is necessary for photosynthesis.  However, under drought conditions, plants produce abscisic acid, which causes the stomata to close and the plants to retain water.

“I am genetically engineering potato and soybean plants in such a way that they over-respond to abscisic acid and become more drought tolerant,” Crowell said. “This work has clear significance to agriculture, especially with increasing human populations and decreasing water reserves.”

Crowell came to Idaho State University this summer from Indiana University – Purdue University Indianapolis. In Indiana, he was successful at engineering Arabidopsis to be drought resistant, without adverse effects on growth and development.

The process Crowell uses to genetically alter potatoes and soybeans is complex. In essence, he modifies the DNA of potato and soybean plants in the laboratory and then uses a soil bacterium, Agrobacterium tumefaciens, to deliver the altered DNA back into the potato and soybean plants. DNA is a long molecule that carries an organism's genetic information and is copied and inherited from generation to generation. Traits are encoded in the DNA as genes, which are short segments of the long DNA molecule, or chromosome.  Humans have 46 chromosomes, a potato has 48.

“I am hoping to increase the water use efficiency of potatoes (and soybeans) and do it in such away that it won't interfere with seed germination and other plant processes,” Crowell said.

Crowell estimates he should be able to produce “transgenic” potato plants within a year that will be tested under controlled growth chamber and greenhouse conditions. Only after extensive studies under controlled conditions can they be approved for field-testing.

“Some people are afraid of genetically altered plants, but they shouldn't be,” Crowell said. “The vast majority of soy and corn grown in this country has been engineered so that it is insect resistant. We are now using similar techniques to engineer soybeans and potatoes to be more drought resistant.”