The Idaho State University Department of Mass Communication has named Thomas Terry, Ph.D., its new chair after a yearlong search. 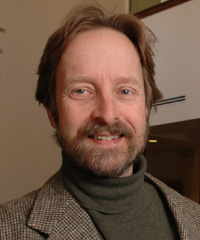 “What appealed to me about this job is the wonderful combination of having administrative responsibilities and still be able to teach,” Terry said. “The department also has a great mix of faculty, who have an obvious concern for the students.”

“I strongly believe in a political system that has a strong, independent press that is well educated,” Terry said. “I look at journalism and mass communication education as a higher calling of some sort. When the Framers (of the constitution) put together our system, they made a conscious decision that an independent press is vital to the function of our government. We need properly trained journalists.”

Terry takes over as department chair from professors Tim Frazier and Paula Jull, who were serving as interim co-chairs after the departure of former chair Bill Loving in 2006.

Terry has three children: James is in the military history doctoral program at the University of North Carolina at Chapel Hill and will receive his M.A. this spring; William is a senior at East Chapel Hill High School; and Elizabeth is a seventh grader at Smith Middle School in Chapel Hill. His wife, Cathy, is a former elementary school teacher.