Laura Woodworth-Ney, Ph.D., Department of History chair at Idaho State University, has written a new book detailing how women played significant roles in the development of the western United States.

When asked to describe her new book, Woodworth–Ney said, “Most people think of masculine themes when they hear the term ‘Western history,’ but scholars have finally turned their attention to the diverse experiences of women in western North America. Hispanic women, Native American women, Asian women, women living in urban and rural areas, wage laborers and female homesteaders, student protesters and female executives all contributed to the complexity of the western region. This book relies on 20 years of new scholarship in the field of women’s history to tell their story.”

“Women in the American West” is Woodworth-Ney’s third book on Idaho history. Her first book, “Mapping Identity: The Creation of the Coeur D’Alene Indian Reservation,” was a 2005 nominee for the Idaho Library Associations Book of the Year. Her second book, “Idaho: The Heroic Journey,” co-written with colleagues Katherine Aiken, Ph.D., dean, University of Idaho, College of Arts and Letters, and Kevin Marsh, Ph.D., assistant professor of history, is a new history of the state of Idaho, published by the Idaho State Historical Society. Woodworth-Ney also is the editor of “Idaho Yesterdays,” the journal of the State Historical Society. 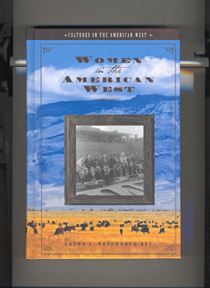 Woodworth-Ney, a fourth-generation Idahoan whose grandparents were immigrant homesteaders, feels a personal connection to western history, as reflected in her writing. Her particular interest is in the western United States, Native American history and women. Her newest book, “Women in the American West,” which was recently published by ABC- CLIO, emphasizes important themes central to gender and women's history, including women’s mobility, women at home, wage labor, immigration, marriage, political participation and involvement in wars at home and abroad. The book is currently the only single-volume reference book to tackle the topic of women in the American West.

Some highlights of the book, as described by ABC-CLIO, include photographs that depict women’s increasing prominence in sports, Japanese women in internment camps during World War II and images that document women’s roles in the 1968 United Farm Workers strike.