The award, presented by the executive board of the National Debate Tournament, is given annually to a member who distinguish herself or himself in the communication profession, while coaching teams to competitive success. 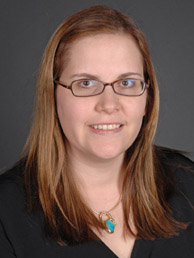 During the seven years that Partlow-Lefevre has been the director of the Idaho State University James M. and Sharon E. Rupp Debate Society, the team has risen to national prominence. It has won more than 200 awards and honors in intercollegiate debate. Of those awards, 137 were for top-five finishes, including 45 first-place awards.

The team has been first in their regional conference six of seven years. They won first round at large bids to the National Debate Tournament in 2006 and 2007. This award recognizes that an ISU debate team was placed in the top 16 individual debate teams in the nation. The team placed third at the Cross Examination Debate Association (CEDA) Nationals championship in 2006.

The award is named for George Ziegelmueller, who taught and coached argument and debate at Wayne State University in Detroit for more than 30 years. Previous award winners include Allan Louden, long-time coach of Wake Forest University, Scott Deatherage at Northwestern University and Herb James at Dartmouth College.

In addition to her coaching duties, Partlow-Lefevre is an instructor in the Communication and Rhetorical Studies Department at ISU, where she teaches courses in intercollegiate debate and principles of speech.

“Sarah is widely acknowledged as one of the top five coaches in the country and this award is yet more proof of that assessment,” said James DiSanza, chair of the ISU Communications and Rhetorical Studies Department. “The NDT would be hard-pressed to find someone more deserving, who has built a better team, or contributed more to this activity than Sarah.”

Partlow-Lefevre recently won a bid to have ISU host the CEDA National Debate Tournament next March. This event will bring over 600 debaters and coaches to ISU from across the nation. ISU has already agreed to host a medium-size tournament for the Rocky Mountain and Northwest regions this fall, which will bring several hundred visitors to the community and “cement ISU reputation as an important center for intercollegiate debate in our region,” said Partlow-Lefevre.