Grammy Award winning Ladysmith Black Mambazo, regarded as South Africa’s cultural emissaries at home and around the world, will perform a concert at 7:30 p.m. March 6 at Idaho State University. 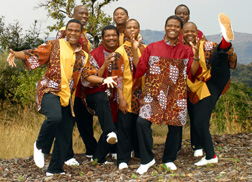 Their concert is part of the ISU 2007-08 “A Season of Note” series and will be held in the Joseph C. and Cheryl H. Jensen Grand Concert Hall of the L.E. and Thelma E. Stephens Performing Arts Center.

The group is the number-one record-selling group from Africa and is known for their appealing visual and musical performances. For more than 30 years, Ladysmith Black Mambazo has married the intricate rhythms and harmonies of their native South African musical traditions to the sounds and sentiments of Christian gospel music.

In addition to their work with Paul Simon, Ladysmith Black Mambazo has recorded with numerous artists from around the world, including Stevie Wonder, Dolly Parton, The Wynans, Julia Fordham, George Clinton, The Corrs and Ben Harper.

Black Mambazo provided soundtrack material for Disney’s “The Lion King, Part II” as well as four other films. A recent film documentary titled “On Tip Toe: Gentle Steps to Freedom, the story of Ladysmith Black Mambazo,” was nominated for an Academy Award. The group is well known for its Life Savers candy commercials. Their performance with Paul Simon on “Sesame Street” is legendary and is one of the top three requested “Sesame Street” segments in history.

Black Mambazo has been invited to perform at many special events including the 1996 Summer Olympics. The group’s Web site is www.mambazo.com.

Tickets can also be purchased over the phone at (208) 282-3595 or online at www.isu.edu/stephens. Patrons can purchase tickets on event nights beginning at 6 p.m.