Century High student gets taste of real science at ISU

The process of science is slow, but the experience of it is fast. 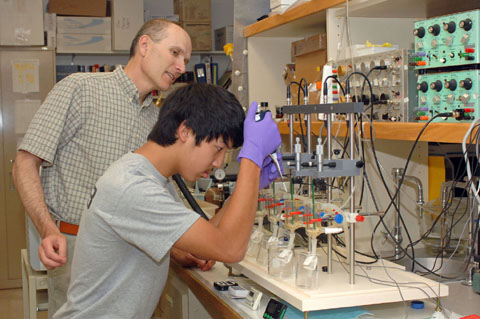 Devaud is participating in the Biology Youth Research Program at Idaho State University working in Rodnick’s labs in the ISU Biological Sciences Building with Century High School teacher Meg Fleischmann (see accompanying story). They’re collaborating on one of Rodnick’s research project titled “Exploring Sex Differences in Cardiac Energy Metabolism and Function in Rainbow Trout: A tour from Isolated Mitochondria to Swimming Fish.”  If all goes well, Devaud and Fleischmann will be listed as contributors to the study, when Rodnick goes through the process to publish its results in a scientific journal.

The Century junior has extended and expanded his BYRP commitment from its normal 10-hours in a semester, to a near full-time vocation during a good chunk of the summer. He is working six hours per day, Monday through Thursdays, for six weeks. He also came in to Rodnick’s lab on weekends during the spring to learn some of the necessary background and skills to begin participating in the study.

“I saw this as something I might not do as a career, but I thought it was a fascinating subject,” Devaud said. “It seemed like a good thing to try, and if I liked it, I liked it, and could maybe do it in college.”

This is where he is learning about the slow aspect of the process of science. To conduct an experiment on the hearts and isolated mitochondria of fish, he first had to learn how to operate several machines on weekends in the spring before the summer began. But before he could master the machines, he had to know the background on what he was studying. He has been given additional reading materials and tasks to master.

As the study has progressed, he has learned about the meticulousness of science, from properly recording data to properly washing beakers so the next time they are used a sample isn’t contaminated. A lot of time and effort goes into conducting a long-term and exacting scientific study.

“We can come in here and then all of sudden we’ve been here six or eight hours and we don’t even know it,” Devaud said. “The time just goes by fast because we’re always doing something or learning something else.”

He’s been working with Fleischmann, who will be his anatomy and physiology teacher next year at Century High School. His future teacher summed up their mutual experience participating in the study being conducted in Rodnick's lab.

“In a high school setting we have an hour to conduct a lab and students leave thinking that they’ve done some research,” Fleishmann said. “The big take-home message here is that research just does not happen that fast and takes a long time. But, it is a lot of fun.”