The couple, having already contributed $1.5 million to the original project, naming the Dr. William L. and Doris Weaver Brydon Mezzanine, completed an additional cash gift of $50,000 in response to Bistline’s call for support. 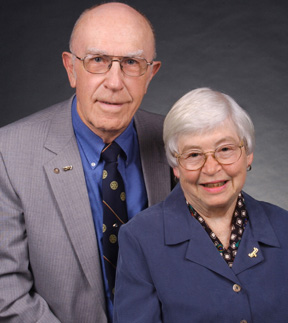 Idaho State University President Arthur Vailas, Ph.D., was among the first to hear the news.

“Bill and Doris have been devoted to Idaho State University and to Pocatello,” Vailas said.  “The continuation of their already extraordinary support is especially moving, and I think demonstrates an exemplary commitment to our community as a whole.  Without these people and others willing to take an interest and invest, we could never accomplish these truly remarkable things.”

A longtime physician in Pocatello, Bill Brydon graduated from Idaho State University in 1952 and then earned his Doctor of Medicine degree from Washington University in St. Louis, Mo.  After serving in the Air Force, he practiced pediatrics in Seattle for two years and then in Pocatello for 23 years.  After re-specialization in asthma, allergy and immunology, he continued in those fields for another 12 years. After “retirement” he served as assistant director of ISU’s Centennial Celebration in 2001.

Doris Brydon received a Bachelor of Science degree in zoology in 1952 and a Bachelor of Arts degree in business finance in 1987, both from Idaho State University.  She also received her degree in physical therapy from Washington University, St. Louis, in 1955, and practiced that profession in Pocatello for 17 years, during which time she also managed Dr. Brydon’s offices.  Both Bill and Doris are active in a broad range of civic, musical and educational activities.

When asked about Beverly Bistline’s challenge, which is directed toward paying off the remaining debt on the Stephens Performing Arts Center, the Brydons paraphrased Martin Luther King Jr.  “Our lives begin to end when we remain silent or inactive about things that matter. The man who gets but never gives may survive for years but never lives.”

Bistline announced earlier this year that she will match all new cash gifts to the Stephens Center completed by July 1, up to $250,000.  To encourage donors to make their best effort, Bistline will double that amount if the $250,000 goal is reached by the deadline.

Essentially, gifts made by July 1 are matched two for one, as long as the maximum is reached, according to Pauline Thiros, planned giving officer with the ISU Foundation.

To participate in the Beverly Bistline Challenge and double, or possibly triple a gift’s value to the Stephens Center, contact Thiros at the ISU Foundation, 221-2352, or by e-mail to thirpaul@isu.edu by July 1.