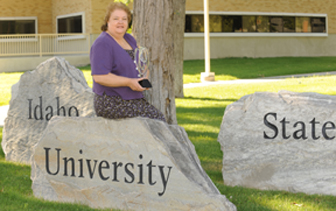 NAOSMM has had several other members from ISU.  Shirley Buchli received this same award in 1992.  Mark Cherry in chemistry is presently a member and attended the 2007 conference.

Whatever their titles, all members are involved in the purchase and supply of all kinds of scientific chemicals and scientific apparatus in a wide variety of institutions throughout the United States, including large multi-campus state institutions, small private colleges, and pharmaceutical companies, in addition to associate members of national manufacturing companies and local and national scientific supply companies.

The organization provides a source of information exchange through member contacts, as well as through an annual meeting that is held each summer. The organization’s seminars and workshops assist in other related matters to upgrade the profession.