A gunman shot and killed “Flo” Gallagher, 60, on Oct. 11 in Grand Junction, Colo., in front of the home of dentist Terry Fine, 61, a friend of the Gallaghers. Terry Fine was also shot and killed by the gunman. Michael Gallagher was not injured in the attack, according to news reports.

A public memorial for Flo Gallagher will be held at 11 a.m. Saturday, Oct. 18, in the Robinson Theater at Mesa State College in Grand Junction.

Flo was remembered fondly by friends and coworkers. 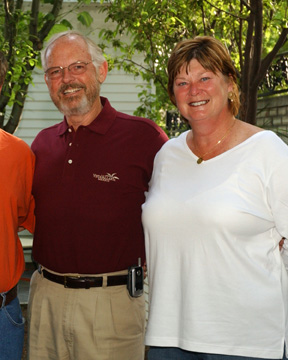 “Everyone who knew Flo is shocked at the tragic and sudden loss of such an enthusiastic, optimistic and good-natured person, someone who was a highly regarded educator in her own right,” said Idaho State University President Arthur C. Vailas. “Even after so many years away, she is remembered at ISU with personal affection and high professional regard.”

Flo Gallagher was in the first year of her retirement from Grand Junction High School, where she had been a reading teacher. When she was living in Pocatello, Flo was a literature teacher at Franklin Junior High School from Aug. 31, 1987 to June 6, 1996.

She was known at Franklin Junior High School for her humor and lively personality, her high expectations of students, her professionalism and willingness to try new ideas.

"Flo was really the life of Franklin," said Natalie Barfuss, a former colleague and close friend of Floyce Gallagher. She said that Gallagher's connection to Idaho State University through her husband opened many opportunities for Franklin students. "She was Franklin's 'in' to ISU."

Michael Gallagher, Ph.D., has spent almost 40 years in higher education. He was Interim President for Idaho State University from October 2005 through June 2006. He began his career as a business instructor. At ISU he served as Dean of the ISU College of Business for two years and as Vice President for Academic Affairs from 1989 to 1996.

Gallagher then became president of Mesa State College in Grand Junction from 1996 to 2003 and has been a professor at the college teaching business since leaving ISU as Interim President.

The Gallaghers were picking up Terry Fine and his wife, Linda, to go on a vacation trip to Las Vegas when the gunman Stefan Alexander Martin-Urban approached the group in the Fine’s driveway and began shooting, according reports in the Grand Junction Sentinel newspaper and the Associated Press.

Linda Fine and a neighbor, Paco Larson, who was attempting to help the Fines, were shot and wounded. Michael Gallagher was uninjured, but transported multiple victims to St. Mary’s Hospital.

No connection has been made between the shooter Martin-Urban and any of his victims. Martin-Urban died of self-inflicted gun wounds on Oct. 11.

Idaho State University will fly its flag at half-staff to honor Flo Gallagher on the day of her memorial service, which has not yet been announced.