Idaho researchers are helping to try to re-establish a mountain quail population in southern Idaho “that is clinging by its toenails” to survive.

Mountain Quail once thrived in Idaho, but are now nearly extinct in the Gem State. There is a small population reported in the Riggins area as well as sporadic reports of a few sightings of the bird in other parts of the state.

And now, due to a collaborative effort, there is a small population of the birds in the Bennett Hills area north of Mountain Home. 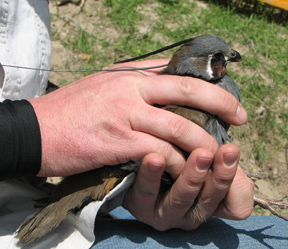 Idaho State University researchers working with the Idaho Department of Fish and Game, Quail Unlimited, the Bureau of Land Management and private landowners for the last three years have attempted to re-establish a population of Mountain Quail in the Bennett Hills. The have released an average of about 65 birds the last three springs.

Biologists estimate from those releases and from successful breeding the Bennett Hills population is between 50 and 100 birds.

“Our primary goal is to establish a self-sustaining population,” said David Delehanty, Ph.D., ISU associate professor of biology who is the lead person for the University involved with the project.

“We are trying to promote reproductive success following release,” he continued, “looking at seasonal movement, particularly in the winter, and trying to determine why some releases of the birds are successful and why the birds sometimes perish.” 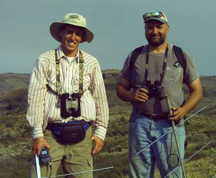 Through the 1960s mountain quail were a commonly hunted game bird in the state. Their population crash was due habitat change and habitat degradation that occurred in conjunction with the introduction of other non-native game birds in Idaho.

Mountain quail only occur in the high western mountain country of North America and are the largest native American quail. Hunters are reminded this fall to know their target especially when hunting California quail anywhere in western and central Idaho to avoid taking this sensitive species by mistake.

“Mountain quail are the only native quail of Idaho, which makes them a pretty neat bird if you’re an Idahoan,” said Gifford Gillette, an ISU Master of Science in biological sciences student who is working on the project. “They’re the least studied of the six species of native American quail so there is a lot to be discovered about their ecology and life history.”

Gillette, Delehanty, their research colleagues and volunteers closely monitor the quail after the birds are released into an area, using radio collars and telemetry equipment to track and study the birds. The birds inhabit rough, steep country and are difficult to study. Researchers also depend on aerial flights in the winter and spring to conduct counts.

“The country is extremely remote and rugged,” noted Gillette. “The mountain quail use slopes that are even steeper and higher than what chukar use. Mountain quail can be found at elevations anywhere from Douglas fir and choke cherry stands at 7,000 feet on down.”

The researchers hope to make two more releases of up to 100 mountain quail each time in the springs of 2009 and 2010.

“Mountain quail are gorgeous birds and they are a real symbol of the high country,” Delehanty said. “The high mountains of western North America are the only place that they occur. They are a species worth re-establishing in Idaho and if we can get them back in a few places we have the possibility for their populations to begin to rebound."